On 13th September 2017, Global ranking for the least and most stressful cities of the world was released, by a firm called Zipjet, in London. Stuttgart,Germany is  at the top ,Bangalore 130th and, New Delhi 142nd. 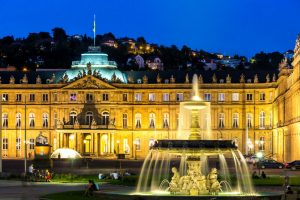 Stuttgart, Germany
i.Global ranking for stressful cities and stress-free cities 2017:
ii.The ranking was done based on the following factors:
Density, Green Spaces, Public Transport, Traffic, Perception of Security, Sunshine Hours,Air Pollution ,Noise Pollution, Light Pollution, Unemployment ,Debt per Capita ,Social Security ,
ii.Family Purchase Power ,Mental Health ,Physical Health ,Gender Equality ,Race Equality.
iv.500 locations were studied and 150 cities were ranked.
v.Four out of the top ten most stress-free cities are in Germany.
vi.Top 5 most stress-free cities in the world are as follows:
1.Stuttgart, Germany
2.Luxembourg
3.Hanover, Germany
4.Bern, Switzerland
5.Munich, Germany
vii.Stuttgart’s lush greenery helped it move to the top of the list. It has a strong economy too. It is   home for world’s great companies like Porsche, Bosch and Mercedes-Benz.
viii.People of Singapore and Taipei have a very satisfactory public transport system.
ix.Abu Dhabi is considered to be world’s safest place by its citizens.
x.Indian cities, Bangalore in the 130th position and Delhi in the 142nd position managed to get a place at the bottom of the list.
xi.Delhi ranks number 8 in the most stressful cities list.
Top 5 world’s most stressful cities are as follows:
1.Baghdad, Iraq
2.Kabul, Afghanistan
3.Lagos, Nigeria
4.Dakar, Senegal
5.Cairo, Egypt
xii.Terrorist attacks have pulled down cities like Bhagdad , Kabul and Cairo to be the most stressful cities in the world.
xiii.The ranking was done by Zipjet, a cleaning services startup, based in London.
About Germany:
Capital                   –   Berlin
Currency                –   Euro
Official language     –   German
President                –   Mr.Frank-Walter Steinmeier