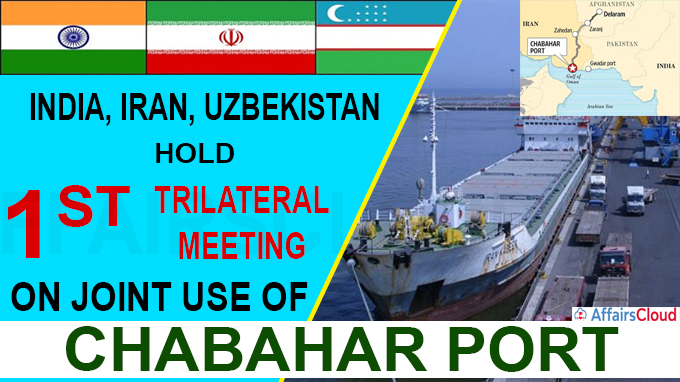 On December 14, 2020, The First Trilateral Working Group (TWG) meeting was held virtually between India, Iran & Uzbekistan to discuss the joint use of Chabahar port in Iran to increase regional connectivity within the 3 countries. The meeting was jointly chaired by Sanjeev Ranjan, Secretary (Shipping), Government of India, D. Dehkanov, Deputy Minister of Transport of the Republic of Uzbekistan and Shahram Adamnejad, Deputy Transport Minister of Islamic Republic of Iran.

i.Uzbekistan & Iran supported India’s proposal of holding “Chabahar Day” on the sidelines of the International Maritime Summit, which will be hosted by India in January 2021.

ii.The TWG meeting is a result of decisions taken during the Virtual Summit between Indian Prime Minister Narendra Modi and Uzbekistan’s President Shavkat Mirziyoyev which took place on December 11, 2020.

i.It is located in the Southeastern part of Iran on the Gulf of Oman and is being developed by India.

ii.It is essential for India as it provides a way for India to bypass Pakistan goods to Afghanistan and other  countries via sea route.

iii.The port would halve the time and cost of doing business with European & Central Asian Countries.

iv.It also holds strategic importance as it is just 170 kms away from Gwadar Port built in Pakistan by China.

ii.As part of the Agreement, India was granted a 10-year lease to develop and operate 2 terminals & 5 berths and access to Chabahar free trade zone.