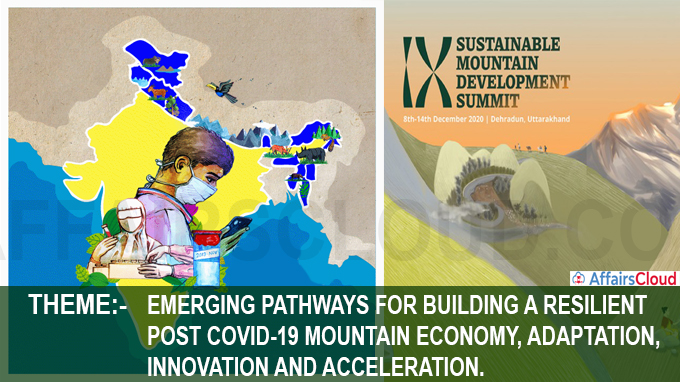 iii.SMDS is an Annual summit organised by IMI to discuss issues regarding Mountains and Hills.

One of the main objectives of the 2020 Summit was to build pathways for a strong and sustainable mountain economy in Post COVID-19 scenario and climate change.

i.During the summit, issues such as Migration, water security, climate resilience and innovation solutions for the farm sector and Disaster risk reduction in Indian Himalayas were discussed.

iii.Meghalaya Chief Minister Conrad K Sangma stated that Governments and communities should work together to conserve rich natural resources of the Himalayan Region.

v.SMDS-X will be organized by Darjeeling Hill Initiative (DHI) in the Darjeeling-Kalimpong Hills of West Bengal in 2021.

ii.R. S. Tolia Memorial Award is given to recognise the efforts of individuals and organisations who have made impact in the integrating and addressing the issues of mountain communities.

iii.The award carries a citation, a shawl, and a cash award of Rs. 1 lakh.

iv.R.S.Tolia Memorial Award has been instituted in the name of Dr. Raghunandan Singh Tolia also known as ‘The Mountain Man’ is the founder of  IMI.

IMI was formed in 2011 to mainstream the concerns of the Indian Himalayan Region (IHR) and the people in the development dialogue of India.

ii.It is the main source of many major rivers of India such as Ganga, Indus & Brahmaputra

i.Himalaya Diwas or Himalaya Day is annually celebrated across India particularly in Uttarakhand on 9th September to create and spread awareness on the conservation of the Himalayan Ecosystem.

ii.On April 30, 2020 Scientists and students from Wadia Institute of Himalayan Geology(WIHG), in the study published in the Global and Planetary Changes The journal revealed a 35 thousand-year history of river erosion and identified hotspots of erosion and wide valleys that act as buffer zones in Ladakh Himalayas.