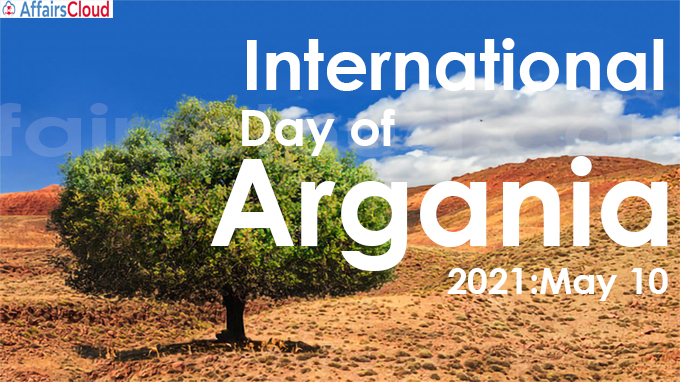 United Nations(UN)’s first International Day of Argania was observed on 10th May 2021 to recognise the importance of the Argan tree in achieving the 3 dimensions (Economic, Social and Environmental) of sustainable development at the local level.

Starting from 2021 the International Day of Argania will be observed annually across the globe on 10th May.

i.The United Nations General Assembly(UNGA) adopted the resolution A/RES/75/262 on 3rd March 2021 and proclaimed the 10th May of Every year as the International Day of Argania

ii.The resolution was submitted by Morocco and was co-sponsored by 113 member states of the UN.

Efforts of UN towards the conservation of Argan Trees:

ii.In 2014, all know-how regarding the argan trees was inscribed on the ‘UNESCO Representative List of the Intangible Cultural Heritage of Humanity’.

iii.In 2018, the FAO recognised the Argan-based agro-sylvo-pastoral system within the area of Ait Souab – Ait Mansour in Morocco – the region where the argan trees were cultivated for centuries – as the ‘Globally Important Agricultural Heritage System’.

ii.Argan Tree – Argania spinosa- is a native species of the sub-Saharan region, Morocco.

iii.This is the defining species – Arganeraie – of the woodland ecosystem.

iv.The tree can survive in temperatures up to 50-degree Celsius and can grow up to 10 meters in height and live for around 200 years.