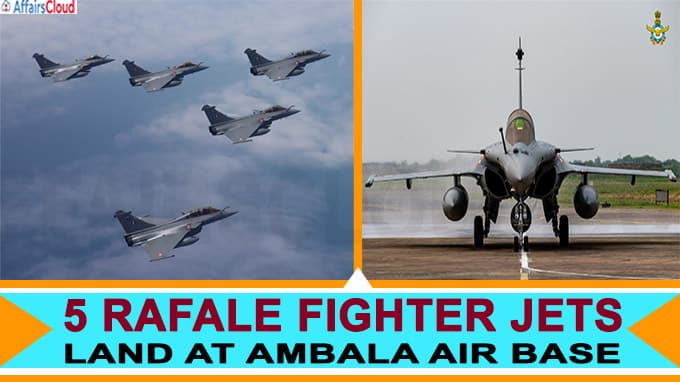 On July 29, 2020, Forty-six months after the €7.87 bn (Rs 59,000 crore) Inter-Governmental Agreement (IGA), that was signed between India and France in September 2016, the first five of 36 Rafale fighter jets, from France were landed in Ambala in Haryana after covering a distance of nearly 8500 km to join the Indian Air Force (IAF). The five aircraft include two twin seater trainer aircraft and three single seat fighter aircraft. These fighter jets are manufactured with 13 India Specific Enhancements (ISE), by Dassault Aviation, a french company.

Ahead of the arrival of the jets, Section 144 (power to issue order in urgent cases of the nuisance of apprehended danger) of the Code of Criminal Procedure (CrPC), 1973 was imposed around Ambala Cantonment to prevent large gatherings and prohibit any photography or video-recording of air-base.

Pilots who flew the Rafale fighter:

-The Ambala airbase also houses two squadrons of the Jaguar fighters and one squadron of MiG-21 Bison.

-Hasimara in West Bengal will house the second Rafale squadron.

For the 1st time India & France conducted joint patrol from the Reunion Island in February 2020 by P-8I aircraft with French Navy personnel to maintain the security of international maritime routes for trade and communications.