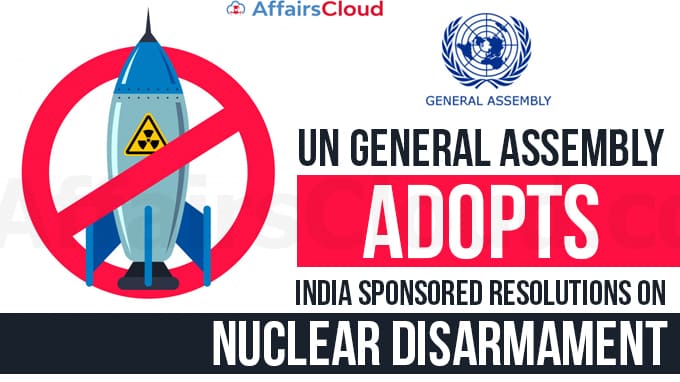 On November 4, 2020, The First Committee of the United Nations General Assembly (UNGA) also known as the Disarmament and International Security Committee  under the chairmanship of H.E. Mr. Agustin Santos Maraver(Spain)(Chair of 1st committee of 75th UNGA) adopted two India-sponsored resolutions on Nuclear Disarmament they are, ‘Convention on Prohibition of Use of Nuclear Weapons’ & ‘Reducing Nuclear Danger’ under ‘Nuclear Weapons’ cluster.

Objective – To reduce risk of nuclear accidents and calls for prohibition on use of nuclear weapons.

i.The UNGA First Committee deals with the issue of disarmament.

ii.It works in cooperation with the United Nations Disarmament Commission and Geneva-based Conference on Disarmament (CD).

“Convention on Prohibition of the use of Nuclear Weapons”:

i.The resolution has been tabled by India since1982 in the General Assembly.

ii.The resolution requests for the Conference on Disarmament (CD), Geneva to commence negotiations for prohibition/threat of use of nuclear weapons under any circumstances.

The main aim of the resolution is for adoption of a universal and legally binding agreement that would generate necessary global political will leading to total elimination of nuclear weapons.

iv.Previously, the Nuclear Weapons Convention Treaty was proposed but it remains inactive at the Conference on Disarmament.

i.The resolution tabled since 1998 aims to draw global attention to risks of unintentional or accidental use of nuclear weapons.

ii.It also highlights the need for review of nuclear doctrines.

i.CD is a multilateral disarmament forum established by the International community to negotiate arms control and disarmament agreements.

The First part of the 2020 session of CD met in Geneva from 20th January to 27th March. The second and third sessions were set to take place in March 2020 but were postponed due to the pandemic.

i.On September 14, 2020, India & Afghanistan were elected as Members of the United Nations (UN) Commission on Status of Women, a body of the Economic and Social Council (ECOSOC).

ii.United Nations(UNs) International Day for the Total Elimination of Nuclear Weapons is annually observed across the globe on 26th September to provide an opportunity for the global communities to reaffirm and prioritize their commitment to the global nuclear disarmament.

About Conference on Disarmament (CD):