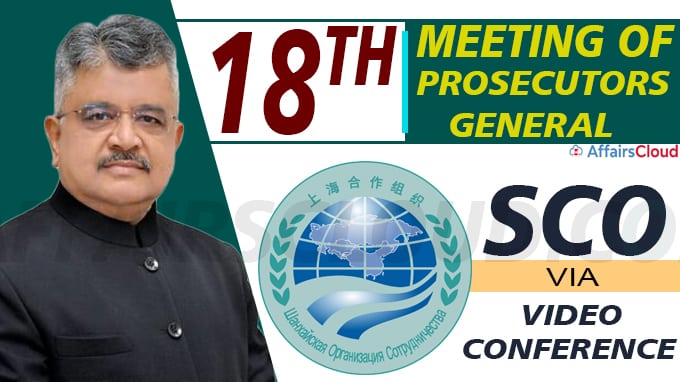 On October 20, 2020, the 18th meeting of Prosecutors General of Shanghai Cooperation Organisation (SCO) Member States was virtually organized by the General Prosecutor’s Office of Uzbekistan from Tashkent where India was represented by Solicitor General (SG) Tushar Mehta.

–The officials also exchanged the information on modern supervisory practices and effective mechanisms to prevent corruption and ways to combat it.

Participants: Apart from the delegations from SCO member States the event was also attended by the officials from observer states – Belarus, Afghanistan, Iran and Mongolia; dialogue partners – Armenia, Azerbaijan and Cambodia.

ii.Union Minister Dr. Subrahmanyam Jaishankar, Ministry of External Affairs (MEA) had a four-days visit to Russia from September 8-11, 22 to attend the SCO-CFM (Council of Foreign Ministers) Meeting in Moscow.