On august 14,2019,  Ministry of textiles and a total of 16 states from the country have signed a Memorandum of Understanding (MoU) at a function in New Delhi to take project Samarth– which is Scheme for Capacity Building In Textile Sector (SCBTS) to impart skill based training to workers. 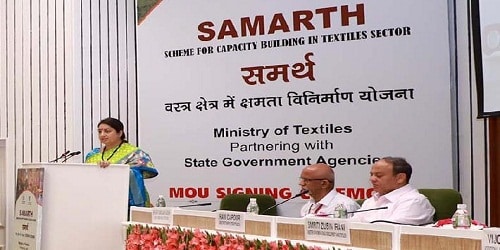 Key points
i. A total of 18 states were initially planned to partner with the textile ministry. But Odisha and Jammu & Kashmir were not present during the function.
ii. A short film was screened on the occasion and a souvenir was also released.
iii. The ministry urged the states of TamilNadu and Jharkhand to relook on their targets as their targets were much below the requirements of skilled workers.
iv. There is a gap of 16 lakh trained skill worker in the textile industry.
v. Aim: The aim is to develop 10 lakh youth upto 2020 in the textile sector, excluding spinning and weaving in the organised sector, with a projected outlay of Rs.1300crore.
vi. Training and implementation: Over 3.5lakh targets have been aimed by the ministry to implement the scheme where after the training, employment will be provided to all the beneficiaries in textile related activities.
vii. Features in the training: The features are Aadhar enabled Biometric System (AEBAS), recording of CCTV (Closed Circuit television). Dedicated call centre, online monitoring and Mobile app based Management Information System.
viii. Addition benefit: People who have not got the job after training, will be provided additional benefits under the Mudra (Micro Units Development & Refinance Agency) scheme. 75% of workers in textile sector and 70% beneficiaries of Mudra loan are women.
ix. The 16 states that signed MoU They are Arunachal Pradesh, Kerala, Mizoram, Tamil Nadu,Telangana, Uttar Pradesh, Andhra Pradesh, Assam, Madhya Pradesh, Tripura, Karnataka, Manipur, Haryana, Meghalaya, Jharkhand and Uttarakhand.

Flagship scheme:
The flagship scheme was implemented by the Textiles ministry from 2010 to 2017 with the target to provide 15lakh additional skilled workers by 2017 in the textile sector.
i. Under the scheme a total of 11.14 lakh persons were trained by March 2018 and 8.41lakh persons were provided placement.