150th Gandhi Jayanti, the birth anniversary of Mahatma Gandhi and International Day of Non-Violence was observed on October 2, 2019. The birthday of Late Lal Bahadur Shastri, the second Prime Minister of India was also observed on this day. 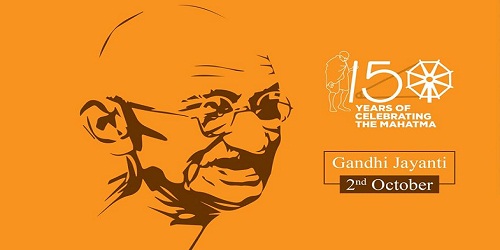 International Day of Non-Violence 2019
This day was adopted by the United Nations General Assembly (UNGA) through the resolution A/RES/61/271 dated 15 June 2007. This annual observance aims to propagate non-violence through education and public awareness.

PM Modi pens ode to ‘guiding light’ Gandhi in NY Times
As a tribute to Gandhiji, PM Modi wrote an op-ed in The New York Times titled “Why India and the World Need Gandhi”.

Gandhi Sandesh Padyatra
The Congress leaders celebrated the occasion by organising Gandhi Sandesh padyatra across the country. Rahul Gandhi joined the foot march in Delhi and it was led by interim President of Congress party Sonia Gandhi. It began from Delhi Congress office Rajiv Bhavan at Deendayal Upadhyay Marg and headed to Rajghat, about 3 kilometers away.

PM in Gujarat
Following are the highlights of Prime Minister Narendra Modi’s visit to Ahmedabad, Gujarat:
PM reached Sabarmati Ashram in Ahmedabad and paid tribute to Mahatma Gandhi. He was accompanied by Gujarat CM Vijay Rupani. He visited the Sabarmati Riverfront. He released a commemorative Rs 150 coin. He set a target to achieve the goal to eradicate ‘single-use plastic’ from India by the year 2022.
Rural India and its villages were declared ‘open defecation free’ (odf), by building over 11 crore toilets at the ‘Swachh Bharat Diwas‘ program in Ahmedabad. He also launched a book, ‘My Life, My Message’, published by the Sabarmati Ashram. It is on the life of Gandhi.

Delhi-NCR students create two Guinness records
The first record was in the category of ‘environmental sustainability lessons to the largest number of students at one place’ wherein close to 5,000 children participated.
The second record is of ‘the largest number of assembly and lighting of solar lamps’ in which more than 5,000 students took part.

Postage stamp Launched by French postal department
A postage stamp bearing the image of Mahatma Gandhi was issued by Franch postal service company La Poste on Wednesday to commemorate the 150th birth anniversary of the Mahatma. Similar postage stamps were issued in Uzbekistan, Turkey, Palestine and other countries around the globe on Gandhi Jayanti.

Initiatives by other countries