A global treaty banning nuclear weapons was adopted at the United Nations on 7th July by 122 countries  . But all nuclear states and NATO members have boycotted the negotiations except for the Netherlands.

The treaty requires of all ratifying countries should “never under any circumstances to develop, test, produce, manufacture, otherwise acquire, possess or stockpile nuclear weapons or other nuclear explosive devices.” 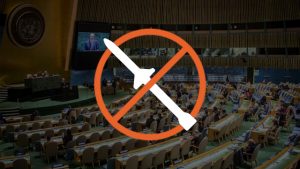 The United States, Britain and France rejected the treaty within hours of its adoption because these countries were of the view that:-

The International Committee of the Red Cross(ICRC)  declared the adoption “an important victory for our shared humanity.” (ICRC) is a humanitarian institution based in Geneva, Switzerland and a three-time Nobel Prize Laureate.

NATO (the North Atlantic Treaty Organization) is an international alliance that consists of 29 member states from North America and Europe.

NATO ends its Combat in Afghanistan