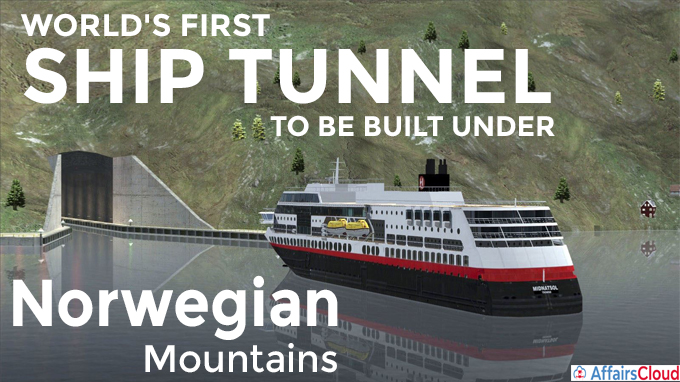 The World’s 1st Ship Tunnel, ‘Stad Ship Tunnel’ is to be constructed in Norway. The tunnel will run underneath the mountains in Norway’s Stadhavet peninsula and will help ships to cross the Stadhavet sea.

Reason for the Tunnel:

i.At present, ships have to wait for days for harsh weather conditions & rough tides to improve in the Stadhavet Sea before transiting the area.

ii.The tunnel will be large enough to accommodate large ships also. It is expected to strengthen the area’s industrial and commercial activities.

About Stad or Stadlandet peninsula:

i.It lies in Stad Municipality in north western part of Nordfjord district in Norway as dividing point between Norwegian Sea and the North Sea.

ii.It is a 500-metre-high mountain plateau comprising of a 645-metre-tall Tarvaldsegga peak. It plunges into sea in a 497-metre-tall cliff at Kjerringa.

i.August 17, 2020, Indian Railways’ North East Frontier Railway zone is constructing the world’s tallest pier bridge, having height of 141 metres, across river Ijai in Manipur with an outlay of Rs 280 crore. After completion, it will surpass the existing height record of 139 meters of the Mala – Rijeka Viaduct, Montenegro in Europe.