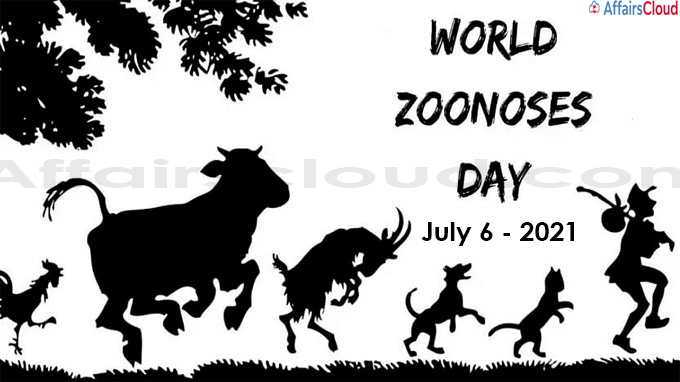 World Zoonoses Day is annually observed across the globe on 6th July to create awareness about zoonoses or zoonotic disease, a disease or infection transmitted from vertebrate animals to humans. The day also commemorates the first vaccination administered against zoonotic disease.

i.Louis Pasteur, a French chemist and microbiologist, was one of the founders of medical microbiology.

iii.He has contributed to the germ theory and the study of infectious diseases.

i.Zoonoses include the major percentage of all the new and existing diseases in humans such as HIV (human immunodeficiency virus), Ebola virus disease, salmonellosis, Avian influenza, West Nile virus and COVID-19.

ii.Zoonoses like HIV began as zoonoses and mutated into human-only strains.

iii.According to the World Health Organisation(WHO), there are more than 200 known types of Zoonoses.

iv.The health and economic cost of zoonotic diseases fall on the poor countries which bear around 98% of the global burden of zoonoses.

Zoonotic pathogens refer to the pathogens like bacterial, viral or parasitic, or may involve unconventional agents and can spread to humans through direct contact or through food, water or the environment.

As a part of the One Health approach, the WHO collaborates with the Food and Agriculture Organization of the United Nations (FAO) and the World Organisation for Animal Health (OIE) on the Global Early Warning System for Major Animal Diseases (GLEWS).