The World Tourism Day(WTD) is celebrated annually on September 27. The theme for the year 2019 is “Tourism and jobs: a better future for all”. The host nation for this 2019 WTD is India, selected by the United Nations World Tourism Organisation(UNWTO) where the main eventwas held at New Delhi. The day aims to promote social, cultural, political and economic values through tourism. 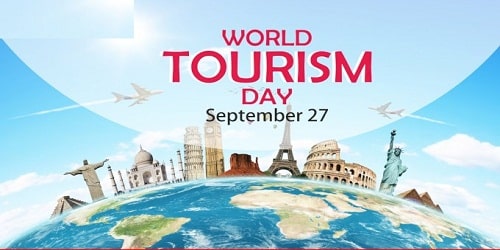 Key points
i. The third session (Torremolinos, Spain, September 1979), of the UNWTO General Assembly decided to celebrate World Tourism Day, from 1980 onwards. The day was chosen to coincide with the day, the World Tourism Organization was constituted in 1970.
ii. Theme selection: Every year, the UNWTO selects the theme for world tourism day on UNWTO Executive Council’s recommendation.
iii. Reports: International tourist arrivals worldwide have grown from 25 million in 1950 to 1.3 billion in 2019. Similarly, international tourism revenues have also grown from United States(US) $2 billion in 1950 to US $1260 trillion in 2015.Tourism is expected to grow by 3% per annum until 2030. Tourism which generates 10% of jobs annually, is included in the Sustainable Development Goals(SDG).

Vice president confers National Tourism Awards 2017-18 in New Delhi
The vice president of India, Shri Venkaiah Naidu, presented National Tourism Awards for the year 2017-18 in New Delhi. A total of 76 awards under various categories were conferred. During the event tourism minister Prahlad Singh Patel announced that good Samaritans awards for people who help tourists, would be conferred from 2020 onwards.