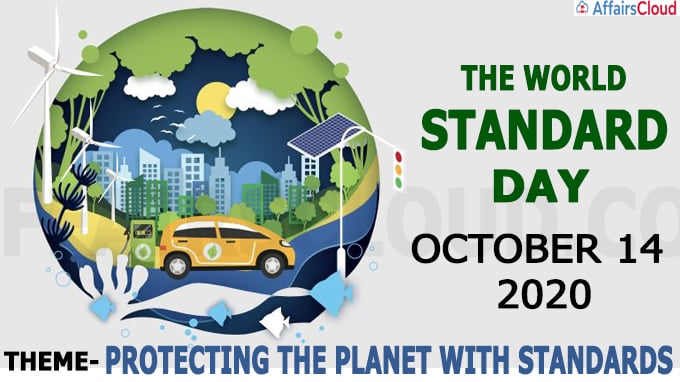 Theme of World Standards Day 2020– “Protecting the planet with standards”.

The day also aims to  raise awareness about the importance of standardisation to the global economy  among the consumers, regulators and industry.

This will enhance peace and prosperity of earth without harming it.

Reason Behind the Theme

Grab the opportunity to combat climate change with the power of international standards.

Runners-up- Avishek Sahoo from India and Mohsen Jafari from the Islamic Republic of Iran.

i.This day(October 14) was specifically chosen, as delegates from 25 countries first gathered in London in 1946 and  decided to create an international organization focusing on  facilitating standardization.

i.All aspects of energy savings, water and air quality are covered by standards.

ii.Especially ISO 14001 is the universal  benchmark for  best practice in environmental management, which can be applied to businesses of any size.

i.Bureau of Indian Standards (BIS) is the national standard body of India established under the BIS Act 2016 in October 2017.

ii.It is working under the aegis of Ministry of Consumer Affairs, Food & Public Distribution, Government of India.

iii.It is responsible for the harmonious development of the activities of standardization, marking and quality certification of goods and for any related or incidental matters.