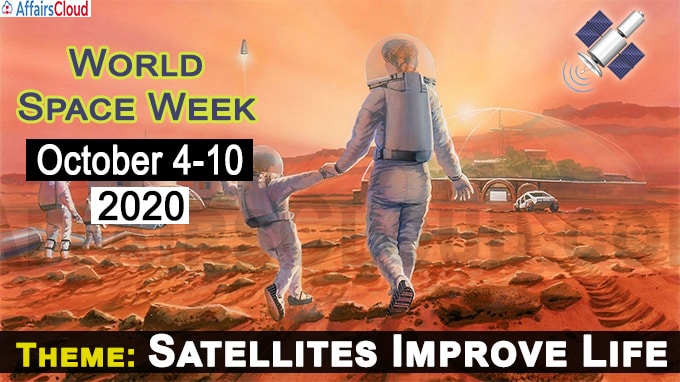 The largest annual space event in the world i.e. World Space Week (WSW) is celebrated annually from October 4-10 at the international level under the United Nations (UN) resolution 54/68 of 6 December 1999  to celebrate the contributions of space science and technology to the betterment of the human condition. The WSW 2020 is being celebrated on the theme of “Satellites Improve Life” and in WSW 2021 theme will be “Women in Space”.

–On 4 October 1957, the first human-made Earth satellite, Sputnik 1 was launched in outer space for space. Then on 10 October 1967, the Treaty on Principles Governing the Activities of States in the Exploration and Use of Outer Space, including the Moon and Other Celestial Bodies entered into force also known as “Magna Carta of Space” was signed. That is why the space week is celebrated between these days commemorating their anniversaries.

–The United Nations Office for Outer Space Affairs (UNOOSA) is the UN office responsible for promoting international cooperation in the peaceful uses of outer space.

–In India, the celebrations took place in the state of Andhra Pradesh, Chhattisgarh, Gujarat, Karnataka, Kerala and Maharashtra by different organizations including Space Education, Research and Development (SSERD).

–On global front the organizations of Women in Aerospace Europe (WIA-E) in The Netherlands, International Astronomical Union (IAU) in Paris, France, and International Telecommunication Union (ITU) in Geneva, Switzerland among others are celebrating.

i.The Indian Space Research Organization(ISRO), Bengaluru signed an MoU with the Aryabhatta Research institute of Observational Science (ARIES), Nainital for the cooperation in the Field of Space Situational Awareness(SSA) andAstrophysic.

ii.ISRO announced that Chandrayaan-2 has captured images of Craters of the Moon by Terrain Mapping Camera – 2 (TMC-2) and named one of the craters as ‘Sarabhai Crater’ after Indian astrophysicist Dr. Vikram Ambalal Sarabhai who is regarded as the Father of Indian Space program.

It is a non-profit organization committed towards promoting space and STEM (Science, technology, engineering, and mathematics) education around the world.