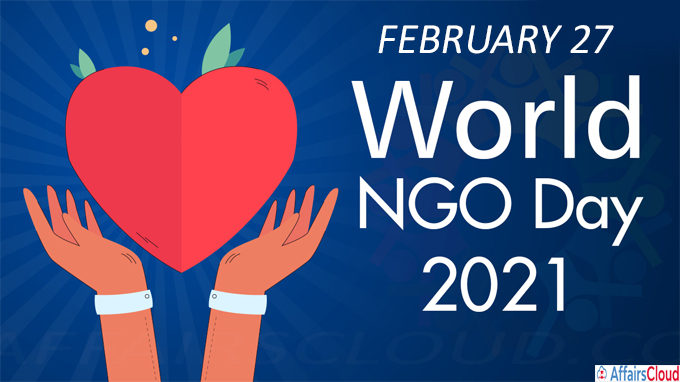 World NGO (Non-Governmental Organization) day is annually observed across the globe on 27th February to create awareness about the importance of social work and to recognise and honour the contributions of the Social workers, NGO founders, employees, volunteers, members and supporters who are working towards the betterment of the society.

To recognise the contribution and impacts of NGOs on the world.

i.The idea of the International Day to recognise the contributions of the NGO, World NGO day, was initiated in the European Union(EU) by Marcis Liors Skadmanis, UK based social entrepreneur and philanthropist.

iii.The day was officially recognised and declared by the 12member countries of the Council of the Baltic Sea States (CBSS).

iv.The day was officially adopted into the Final Statement Resolution of the X Baltic Sea NGO Forum part of the German CBSS Presidency held from 23rd to 25th April 2012 at Berlin, Germany.

The CBSS has 11 Member states as well as European Union and 11 countries with observer status.

What is an NGO?

The term Non-Governmental Organisation was created in Article 71 of the Charter of the United Nations in 1945.

It is a non-profit group that functions independently of the government.

Around 80% of the global citizens state that NGOs make it easy to be involved in positive social change.