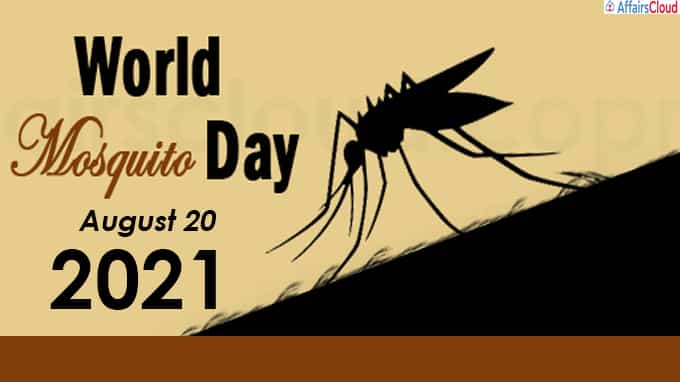 World Mosquito Day is observed annually across the globe on 20th August to commemorate the discovery of British doctor Sir Ronald Ross in 1897 that female mosquitoes transmit malaria between humans.

Sir Ronald Ross in his discovery declared the 20th August of every year as the World Mosquitoes.

i.He discovered that the Anopheles mosquitoes (female mosquitoes) are responsible for the transmission of malaria parasites to humans.

ii.Since the discovery was made, the 20th August has been observed as World Mosquito Day.

i.World Malaria Day is observed annually on 25th April to create awareness about Malaria and educate about the prevention methods.

ii.Since mosquitoes are responsible for various dangerous illnesses and diseases, they are considered as one of the World’s deadliest creatures.

i.Malaria, a vector-borne disease, is caused by Plasmodium parasites. There are around 5 parasite species that cause malaria in humans and 2 among these 5, Plasmodium falciparum and falciparum vivax pose the greatest threat to humans.

ii.The World Health Organisation(WHO) states that, as of 2019, there were around 229 million cases of malaria across the globe.

iii.Children under the age of 5 are most vulnerable to malaria.