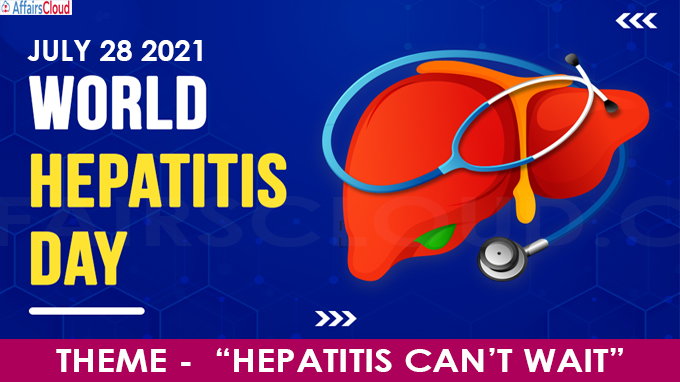 The United Nations(UN)’s World Hepatitis Day is annually observed across the globe on 28th July to highlight the need for the global response defined in the World Health Organisation (WHO)’s Global hepatitis report 2017.

The day aims to create awareness about viral hepatitis, which causes severe liver diseases and hepatocellular cancer.World Hepatitis Day is sponsored by the World Health Organisation (WHO).

The theme of World Hepatitis Day 2021 is “Hepatitis can’t wait”.

Note – World’s first affordable as well as effective new drug for hepatitis C has been registered by Malaysia. This new drug offers hope for accessible treatment to the millions of people around the world who are suffering from this disease.

ii.The 63rd World Health Assembly held in May 2010 in Geneva, Switzerland adopted various resolutions on a variety of global health issues which includes the resolution WHA63.17 proclaiming the 28th July of every year as the World Hepatitis Day.

July 28th marks the birth anniversary of Nobel laureate scientist Dr Baruch Blumberg, who discovered the Hepatitis B virus(HBV) and developed a diagnostic test and vaccine for HBV.

i.Hepatitis is an inflammation of the liver caused by a variety of hepatitis viruses. The 5 main strains of the virus are referred to as types A, B, C, D and E.

ii.Types B and C lead to chronic disease in millions of people and they are the most common cause of Liver cirrhosis, Liver cancer and viral hepatitis-related deaths.

iii.Annually around 1.1 million deaths are caused by type B and C infections and around 9.4 million people are under treatment for chronic hepatitis type C infection.

iv.It is estimated that 1 in 12 persons are infected and have to face life with liver disease if unrecognised.