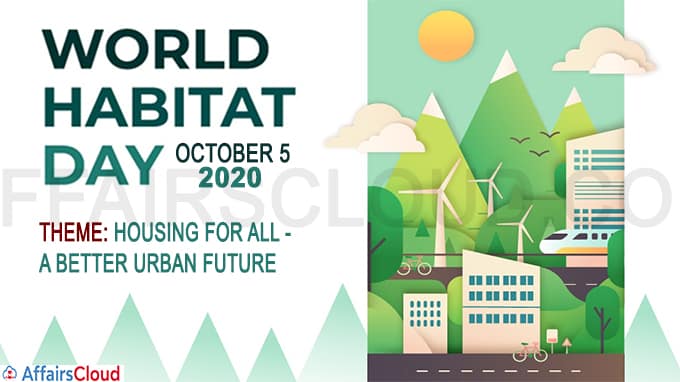 i.The Theme of World Habitat Day 2020 is “Housing for All – A Better Urban Future”.

ii.The Global Observation of the Day will be hosted by the city of Surabaya, Indonesia.

The World Habitat Day was established in 1985 through a resolution passed by the United Nations (UN) General Assembly.  It was first observed in 1986.

i.An estimated 1.8 billion people are living in slums and informal settlements, inadequate housing in cities all over the world.

ii.The Pandemic has highlighted the structural inequalities, as minorities, indigenous people and migrants were affected by housing precarities, overcrowding and environmental hazards.

iii.According to the International Labour Organization (ILO), 55 percent of World’s population do not benefit from any form of social protection.

iv.The Day emphasizes that Housing is a human right, and housing serves as a catalyst for other fundamental rights.  Housing ensures “Right to the City for All”.

v.Due to the pandemic, Housing has become a matter of life and death as people are advised by the government to stay at home due to the spread of COVID-19.

i.The Habitat Scroll of Honour award was launched by the United Nations Human Settlement Programme in 1989.

ii.It aims to recognize contributions made in shelter provision, highlighting the plight of homeless, leadership in post conflict reconstruction and improvements of human settlements and quality of urban life.

iii.It is presented to winners during Global Observance of World Habitat Day.

Winners of 2020 UN-Habitat Scroll of honour:

Initiative by Government of India:

iv.He highlighted the use of technology like Integrated Command and Control Centres (ICCCs) to monitor municipal functions on a real time basis and CCTV across the cities for security of women.