On June 5 every year the World Environment Day is celebrated worldwide and is promoted by the United Nation. The initiative was launched 1974 and has the aim of spreading awareness about environmental issue and its protection. 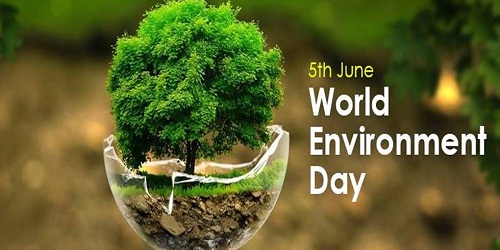 In commemoration of the World Environment Day different ministries of Indian Government has inaugurated different events to launch this year’s theme of : ‘ Beat Plastic Pollution ‘

Three Thematic Sessions Being Held on Day One “Need of the Hour is to Create Social Awareness on Reducing Single Use of Plastic”: Dr. Mahesh Sharma
On June 5, 2018, To commemorate the World Environment Day the Minister of State for Environment , Forest and Climate Change Mr. Mahesh Sharma inaugurated a total of 3 thematic sessions on the theme of ‘ Beat Plastic Pollution’  at VigyanBhawan in New Delhi. These sessions were presented in collaboration with Confederation of Indian Industry (CII) and European Union (EU).
Objective:
To stress on the need of the hour that is social awareness on reducing single use of plastic and beat plastic pollution.
Key points:
The Three Thematic sessions are regarding :Himalayan Ecosystem, Air pollution and Strategic Partnerships.
On Himalayan Pollution :
i. This session was presided by the Director General &Special Secretary, MoEF&CC, Mr. Siddhanta Das.
ii. Here the discussions of waste free Himalayan region and success stories were shared and the study done by National Mission for Sustaining the Himalayan Ecosystem (NMSHE),National Mission on Himalayan Studies (NMHS) were shown.
iii. According to the study , the forest dwellers or ‘Van Rajis’ and their waste management efforts were shared. More waste management has to be done for the socio- economic, ecological and natural habitat of the Indian Himalayan Region.
iv. These could be done through spring revivals, water conservation & management, river bed filtration, climate change, livelihood support, rejuvenation of orchid, utilization of pine needles, addressing human wildlife conflict, alternative sources of energy, conserving medicinal plants and solid waste management.
v. Also microbial bio-composting for sustainable bio degradable waste and session on synthesis of graphene and graphene oxide from plastics were discussed.
On Air pollution :
i. “Air pollution in Indian cities – present status and future action” was held.
ii. Decisions such as migration to BS VI standards directly, interventions to contain and eventually eliminate stubble burning and an action plan for 61 (of the envisaged 100) cities have been made.
iii. Along with this it was seen that straw burning causes a great deal of air pollution eventually costing the govtRs. 1200 crore for pollution only due to this. Decisions on straw management where it could be mixed with combined harvest and used as mulch could help in retention of moisture and prevention of weeds in soil.
On Strategic Partnerships:
i. To create partnerships and collaborations among countries and stakeholders to address the global challenge of plastic pollution .
ii. Counsellor, Environment, Energy, Climate Change, Delegation of the EU in India Ms. HenrietteFaergemann provided EU’s plastic strategy. It focuses on transforming the approach of design, its use, production and recycling .
iii. It showcased experiences of countries and other stakeholders on perspectives of policy, governance, technology, finance and public diplomacy .
Conclusion of the Events :
a) sharing experience between relevant stakeholders of plastic waste management; b) identifying and scaling up plastic waste management initiatives, currently undertaken by industry in partnership with relevant stakeholders; c) emphasized on the importance of public-private partnership for plastic waste management; d) stressing on the role of Government as a facilitator of waste management models; and e) discussions on global best practices for plastic waste management and alternatives to plastics.

Launch of Teeb for Agriculture and Food Report Nitrogen – Joining UP for a Cleaner Environment Scaling Impact Investment in India
On June 5, 2018, A 5 day conference on 4 sessions commenced in VigyanBhawan inaugurated by  Minister of Environment, Forest and Climate Change Dr. Harsh Vardhan in collaboration with UN Environment.
The 4 sessions are as follows :
On “Natural Capital of India: Status and Policy Implications”:
i. The natural capital of India and wealth needed for the attainment of Sustainable Development Goals were assessed.
On “Launch Event for TEEB for Agriculture and Food Report”:
i. Launch of the TEEB Agri Food ‘Scientific and Economic Foundations Report’ and sharing of key findings were done. These were done to attain the 2030 Sustainable Development Goals.
ii. Highlighting best- practices from India on natural farming emerging in small holder agricultural landscapes that can be replicated and scaled up to reduce vulnerability to climate change impacts.
On “Nitrogen: Joining up for a Cleaner Environment” :
i. Highlighting the social benefits and framework of inter-governmental practices for nitrogen Management.
ii. With India’s potential and leadership to attain global nitrogen management .
On “Scaling Impact Investment in India”:
i. It aimed in bringing the innovators, entrepreneurs, industrial houses and policy makers on a single platform with an agenda to find solutions using science and technology .
ii. It focused in leveraging private finance for public good. attracting a significant audience of industrialists, venture capitalists, angel investors, bankers, senior government officials and foreign delegates.

State Environment Ministers Conference: Session on Waste to Wealth
On June 5, 2018, Conference of the State Environment Ministers was held at VigyanBhawan in New Delhi. It was presided by the Minister of State for Environment , Forest and Climate Change Mr. Mahesh Sharma . The environment ministers and senior officials of different states were present .
Objective:
To provide a platform to policy makers to exchange ideas, share experiences, discuss challenges related to environmental regulation in the country and explore possible solutions.
Key points:
i. To promote waste management multi-departmental and ministerial collaboration is needed.
ii. Secretaries of State Governments to coordinate with CSIR institutions and explore the use of indigenously developed waste technologies .
iii. State Governments were to encourage the citizens to adopt Green Good Deeds to solve the day-to-day waste management problem and a monitoring system needs to be introduced.
iv. To increase capacity-building of Urban Local Bodies (ULBs) .
v. The session on Waste To Wealth was chaired by Minister of Environment & Forest, Rajasthan, Mr. Gajendra Singh where he emphasized the use of waste as a resource . This would help in converting waste to wealth.
vi. Brief overview of the 6waste management rules namely – Solid Wastes Management Rules, 2016, Plastic Waste Management Rules, 2016, Bio-medical Wastes Management Rules, 2016, Hazardous and Other Wastes (Management and Transboundary Movements) Rules, 2016, E-Waste (Management) Rules, 2016, and Construction and Demolition Waste Management Rules, 2016 were done.
vii. Discussions regarding the waste management included:
Development and setting up of infrastructure for segregation, collection, storage, transportation of plastic waste and channelization of recycled plastic waste fraction to recyclers with valid registration; Allocation of adequate funds to Government health care facilities for bio-medical waste management; Identification of site (s) for Treatment Storage and Disposal Facility (TSDF) for hazardous waste; undertake regular monitoring for ensuring safety & health of workers involved in dismantling and recyclingdelegation of powers to municipal officers for effective implementation of the rules, enforcement issues and promotion of use of plastic waste in road construction; strengthening municipal governance in the country for improved waste management; and developing regulations within Urban Local Bodies (ULBs).

MoS Dr Jitendra Singh inaugurates an event organized to start a mass movement against plastic pollution
On June 5, 2018, The Union Minister of State (Independent Charge) of the Ministry of Development of North Eastern Region (DoNER), MoS PMO, Personnel, Public Grievances & Pensions, Atomic Energy and Space, Dr Jitendra Singh inaugurated an event on the theme of this year’s World Environment Day.
This event was organized by Indian Institute of Ecology and Environment .
Objective :
To make the campaign against plastic pollution a mass movement.
Key points:
i. Emphasizing the success of the Swacch Bharat Movement that made progress of building 4 lakh girl toilets in one year and 7.5 crore toilets in 4 years the awareness is very important for any issue.
ii. So to reduce plastic pollution and make the ‘Beat Plastic Pollution’ a success the need of social awareness and participation of schools and colleges and universities to reduce pollution is required.