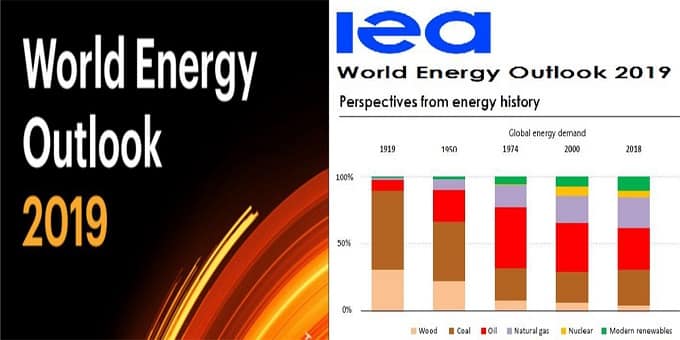 i.The decision to increase subsidies by China, India’s target of 450 GW by 2030, and efforts by the US to strengthen portfolio standards are projected to increase the production of renewable energy.

ii.According to another estimate, CO2 emissions are likely to continue for decades as 30% of the total energy still produced is through coal-based plants.

iii. Oil demand: After 2025 , Oil demand will be decreased and the world will shift towards electric vehicles (e- vehicles). However, the oil demand for the next decade will keep increasing with 85% of increase coming from the US.

iv.Despite the increase in solar energy production, the IEA has projected lower output than other energy think tanks such as the International Renewable Energy Agency- IRENA. The ‘Future of Solar Photovoltaic’ report, recently released by IRENA, estimated solar power generation over 6,000 GW by the year 2040.

Current Policy Scenario: Under this, energy demand can increase by 1.3% per annum      by the year 2040 if the world works according to the rules already established.

New Policy Scenario :At the level of countries, the government will try to limit its            energy requirements by increasing the demand of energy by 1.0% per annum through        policies.

Sustainable Development Scenario– SDS envisages pursuing efforts under the Paris       Agreement to limit it to 1.5 ° C while maintaining a global temperature below 2 ° C, as       enforced.

IEA estimates that by 2035, solar energy’s contribution to total energy will exceed coal-   based power generation if there is a coherence between policies and targets.

About IEA (International Energy Agency):
It is headquartered in Paris, France.
It is an autonomous organization, which works with its 30 member countries to ensure reliable, affordable and clean energy globally.
India became an associate member of the IEA in the year 2017.