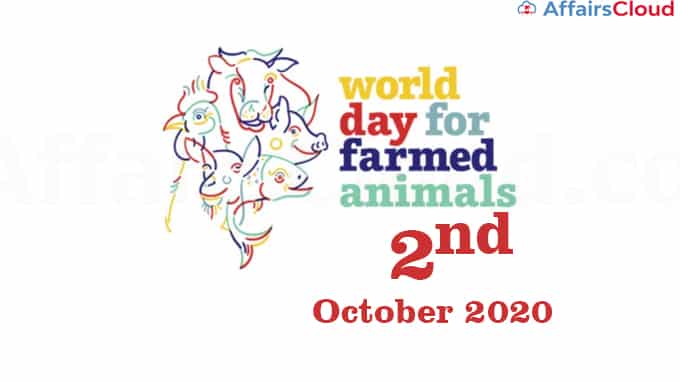 World Day for Farmed Animals is annually celebrated on 2nd October to enhance the needs to treat the farm animals as sentient beings and the importance of farm animal welfare. The International Animal’s Welfare Organisation, World Animal Protection in association with Asia for Animals(AfA) coalition celebrates this day.

Asia for Animals(AfA) coalition is made of 23 well known animal welfare organisations which are focused on improving the welfare of animals in Asia.

Need for the focus on the welfare of animals:

i.Intensive animal farming and poor treatment of farm animals will affect the health of the animals and pose a pandemic level threat to humans.

ii.Pandemic for humans may arise from a strain of the avian influenza virus or bird flu transmitted from wild aquatic birds to farmed chickens.

i.The events of World day for Farmed Animals began on 28th September and various events and activities like webinars, quizzes, were organised.

ii.The World Animal Protection launched a pledge for the consumers to support to end the sufferings of chickens in intensive poultry farms.

iv.The World Animal Protection has influenced the participation of the organisations like Animal Equality and Stray Relief and Animal Welfare(STRAW) in the celebration events.

The day is observed since 1983. World Day for Farmed Animals Asia is an organization that focuses on the importance and urgency of Farm Animal Welfare in Asia and its interlinkages with other global issues affecting animals, people, & our planet.