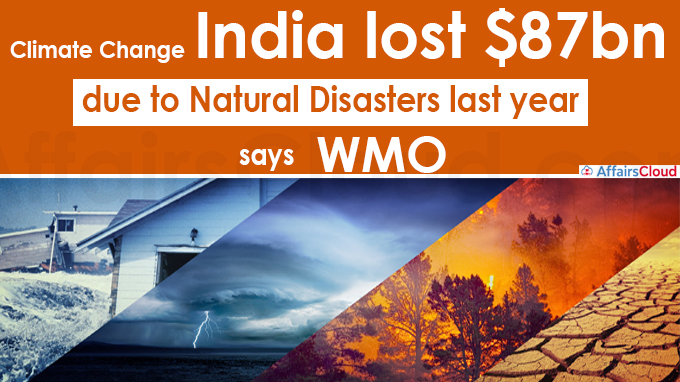 According to the State of the Climate in Asia 2020, a first of its kind multi-agency report published by the World Meteorological Organization (WMO), India has suffered an average annual loss (AAL) of around 87 billion USD due to tropical cyclones, floods and droughts.

ii.The report also examines the socio-economic impacts in a year when the region is also affected by the COVID-19 pandemic.

iii.The report covers every affected region of Asia, from the Himalayas to the Coastal areas, densely populated areas to deserts from the Arctic to the Arabian seas.

The East Asian and South Asian summer monsoons combined with the frequent tropical cyclones, caused floods and landslides, leading to the loss of life and displacement in many countries across Asia.

High Mountain Asia is home to approximately 100000 km2 of glaciers centred on the Tibetan Plateau and Himalayas. This accounts for the largest volumes of ice outside of the polar regions and is the source of 10 important Asian rivers.

According to the Economic and Social Commission for Asia and the Pacific (ESCAP), Tropical cyclones, floods and droughts induced an ALL of several hundred billion dollars.

China, Bangladesh and India have recorded much of the disaster-related displacement (around 4 to 5 million new displacements each) that took place in 2020.

Most of the subregions of Asia has regressed on the Sustainable Development Goal 13: Climate actions. These regions will miss the SDGs unless they make an effort are accelerated to build resilience.

WMO is an intergovernmental organization with a membership of 193 Member States and Territories.
Secretary-General– Petteri Taalas
Headquarters– Geneva, Switzerland