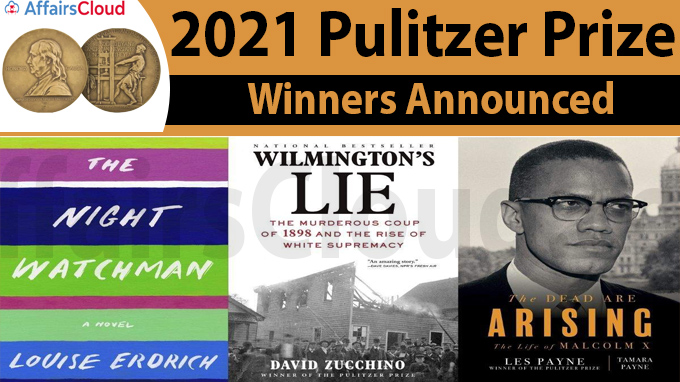 Darnella Frazier, who recorded the murder of Floyd by police officer Derek Chauvin, received a special citation from the Pulitzer Prize Board.

i.The Pulitzer Prize recognises the achievements in newspaper, magazine and online journalism, literature and musical composition within the United States.

ii.The prize honours the books first published in the United States during the year and made available in hardcover or bound paperback for the general public.

iv.The winner of the 21 categories of the Pulitzer Prize receives a cash award of 15,000 USD and a certificate.

v.Only the winner of the Public Service category of the Journalism receives a gold medal.

i.Louise Erdrich won the 2021 Pulitzer Prize under the fiction category for his book titled “The Night Watchman”.

ii.Late Les Payne and Tamara Payne won the 2021 Pulitzer Prize under the Biography category for the book titled “The Dead Are Arising: The Life of Malcolm X”.

iii.“Stride” composed by Tania Leon which incorporates Black music traditions from the U.S. and the Caribbean into a Western orchestral fabric won the 2021 Music Pulitzer Prizes.

i.The New York Times won the Public Service Pulitzers for its extensive coronavirus coverage that exposed racial and economic inequities, government failures in the United States and beyond.

ii.The 2021 Journalism Pulitzer Prizes has honoured many journalists who covered the death of George Floyd and the Black Lives Matter (BLM) movement that followed his death.

iii.The 2021 award under the Editorial Cartooning category was not given.