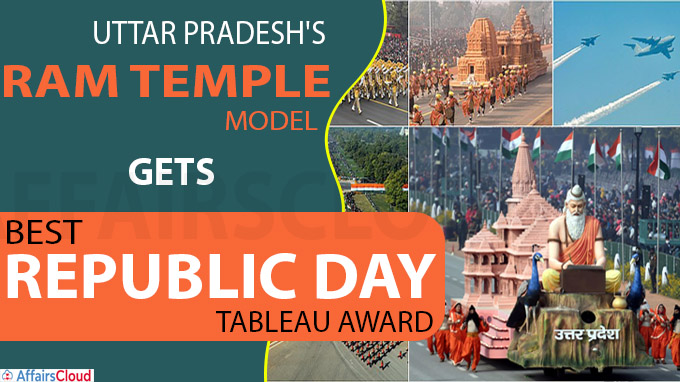 The Republic Day parade tableau of Uttar Pradesh was adjudged as the best tableau among the 32 tableaux that participated in the Parade on 26th January 2021. The theme of the UP tableau was “Ayodhya: The cultural heritage of Uttar Pradesh”.

Kiren Rijiju, Union Minister of Youth Affairs and Sport presented the awards and prizes to the participants.

Among the 32 tableaus that participated in the Republic Day parade, 17 tableaus are from States and Union Territories, 9 from various ministries, departments, paramilitary forces and 6 from the Defence Ministry.

i.The tableau of the Department of Biotechnology won the top honours among the 9 tableaus from various ministries, departments, paramilitary forces and Defence Ministry. The tableau represented Atmanirbhar Bharat Abhiyan: COVID, the process of vaccine development through various processes.

ii.The tableau of Central Public Works Department, CPWD won the special prize for its tribute to fallen heroes of Indian Armed Forces. The theme of the tableau was “Amar Jawan”.

v.Jat Regimental Centre Marching Contingent has been adjudged as the best marching contingent among the three services.

vi.Delhi Police Marching Contingent has been adjudged as the best marching contingent among the Central Armed Police Forces (CAPF) and other auxiliary forces.

Tamil Nadu won the first place in the Union ministry of Jal Shakti’s 2nd National Water Awards for 2019 under the best state (normal) category for the conservation and management of water. K Manivasan, PWD Secretary will receive the Best State Award on behalf of Tamil Nadu Government.