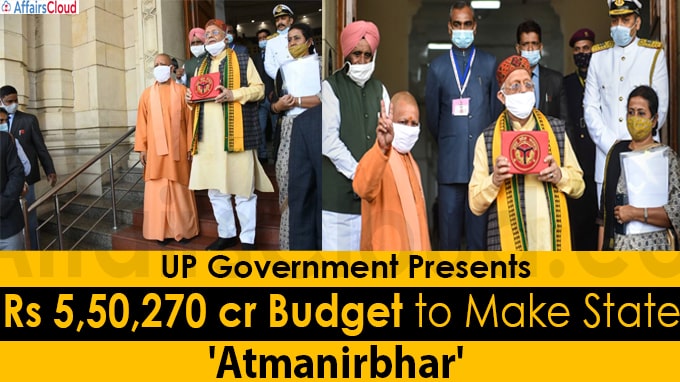 On February 22, 2021, the Finance Minister of Uttar Pradesh (UP), Suresh Kumar Khanna, presented Rs 5,50,270.78 crore in the presence of UP Chief Minister (CM) Yogi Adityanath. Notably, this was the state’s and Adityanath government’s first paperless budget and also the largest budget in the history of UP in terms of fund allocation. It marks an increase of around Rs 37,000 cr from the previous year’s budget size.

With a budget of Rs 100 crore, the UP government has announced Mukhyamantri Pravasi Shramik Udyamita Vikas Yojana under which employment or self employment will be provided to the migrant workers who had come from other States. Notably, around 40 lakh were transported to their native districts during the lockdown in 2020.

In order to boost the agriculture sector and for the farmer’s welfare the UP government earmarked Rs 1,800 crore under various schemes. Additionally, the government allocated Rs 3,098 crore for completion of canal linking projects. Following are the key allocations under agriculture:

In the sector of cane development and sugar industry, distillation of 120 kilolitres per day capacity will be established in Pipraich sugar mill which will start in December 2021. It will be the first sugar mill in North India to manufacture ethanol directly from sugarcane juice.

The UP government also decided to confer ‘Uttar Pradesh Gaurav Samman’ on eminent writers and artists who have not been given any other award by the state. Under this scheme, a maximum of five people will be honoured and given a sum of Rs 11 lakh each on an annual basis.

–Under fisheries, two lakh fishermen are proposed to be covered for free Premium under the Machhuwa Durghatna Beema Yojana.

—Rs 243cr has been allocated for the Pradhan Mantri Matsya Sampada Yojana (PMMSY) that envisages sustainable development of fisheries sector.

–In Horticulture & Food Processing, a provision of Rs 400cr is made for the Pradhanmantri Sookshm Khadya Udyog Unnayan Yojana.

—A provision of Rs 40 crore is made for the implementation of Uttar Pradesh Food Processing Industry Policy, 2017.

–For Animal Husbandry, the budget aims at upgrading breed, along with animal health, disease control, livestock insurance, construction of new veterinary hospitals and establishment of cow-protection centers as well as setting up of temporary cow-shelter sites are aimed.

— A sum of Rs 101cr has been earmarked for an upcoming airport in Ayodhya that has been named Maryada Purushottam Shri Ram Airport.

–A sum of Rs 300cr is proposed for the construction of approach roads to the Ram temple being built in Ayodhya.

–A sum of at least Rs 640 crore is allocated for the development and beautification of Ayodhya including Rs 200 crore for Chief Minister Tourism Fiscal Scheme.

–A sum of Rs 15 crore for the year-long commemoration of the Chauri-Chaura incident centenary.

i.On January 6, 2021, Yogi Adityanath launched a 3 week long campaign namely “Kisan Kalyan Mission” for the state’s farmer welfare and to double their income. It will be organised in every development block of all 75 districts.