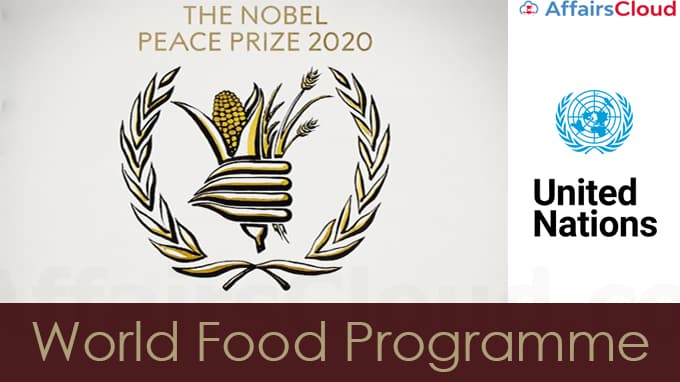 On October 9, 2020 Berit Reiss-Andersen, Chair of the Norwegian Nobel Committee announced the Nobel Peace Prize 2020 to the United Nations(UN) World Food Programme(WFP) for its efforts to fight hunger, for its contribution to improving peace conditions in conflict-affected areas and for acting as a driving force in efforts to prevent the use of hunger as a weapon of war and conflict.

i.UN’s World Food Programme is the largest humanitarian organisation in the world, that addresses hunger and promotes food security.

ii.In 2019, it provided assistance to about 100 million people in 88 countries, who were victims of acute food insecurity and hunger.

iii.The UN adopted, eradicating hunger as one of the Sustainable Development Goals in 2015. It is to be noted that WFP is the UN’s primary instrument to realize this goal.

iv.In spite of pandemic, WFP has proved an impressive ability to increase its efforts.

v.It took an active part in the diplomatic process that culminated in May 2018 in the UN Security Council’s unanimous adoption of Resolution 2417, which for the first time openly addressed the link between conflict and hunger.

The Nobel Laureates will receive a Nobel diploma, a Nobel Medal and a document confirming the Nobel Prize amount of 10 million Swedish kronor (more than USD 1.1 million).

i.List of Indians who bagged Nobel Prize in Peace

ii.Notable winners of Nobel Prize in Peace include,

On September 18, 2020 Krushi Bhavan, a facility developed for the State’s Department of Agriculture & Farmers’ Empowerment located in Bhubaneswar, Odisha won 10th annual AZ Awards 2020 as People’s Choice Winner under the category social good. The awards were revealed at its first-ever virtual AZ Awards Gala. The 12,077-square-metre Krushi Bhavan is one among 20 winners and the only winner from India.