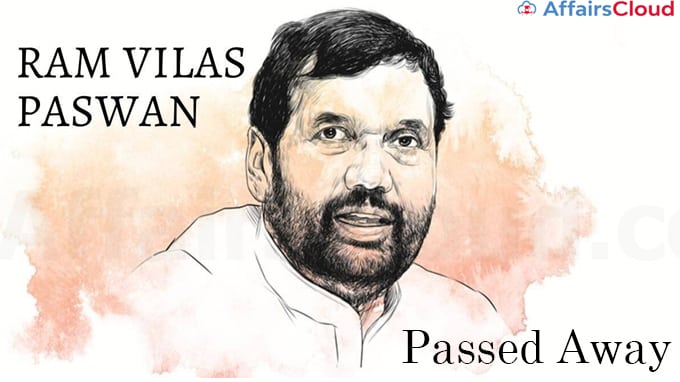 On 8th October 2020, Ram Vilas Paswan, Union Minister of Consumer Affairs, Food and Public Distribution (elected from the Hajipur constituency of Bihar) passed away at the age of 74 in a hospital at New Delhi due to heart ailments. He was born on 5th July 1946 at Khagaria, Eastern Bihar. He was the leader of the Lok Janshakti Party(LJP) and a stalwart of socialist movements and known as the foremost Dalit leader of Bihar.

i.Ram Vilas Paswan was elected to Bihar Legislative assembly in 1969 as a member of Samyukta Socialist Party.

ii.He was elected to the Lok Sabha for the first time in 1977 with highest margin as a member of Janata Party and he held the Guinness record for winning his constituency, Hajipur, with the highest margin for many years.

v.He was elected to Rajya Sabha in 2019 and continued as the Minister of Consumer Affairs, Food and Public Distribution.

i.Ram Vilas Paswan was instrumental in the implementation of the Mandal Commission report in the 1990s.

ii.He played a major role in consolidating the Dalits of North India.

iii.He launched the “One Nation One Ration Card” scheme which enables migrant workers to access food grains at a cheap price.

On 23th September 2020, Suresh Channabasappa Angadi, Union Minister of State for Railways and Bharatiya Janata Party (BJP)’s Member of Parliament(MP) from Belagavi constituency of Karnataka passed away at the age of 65 after testing positive for COVID-19 at the Covid Facility, New Delhi. He is the first Central Minister to die of Coronavirus. He was born on 1st June 1955 at Belagavi, Karnataka.

About Ministry of Consumer Affairs, Food and Public Distribution: