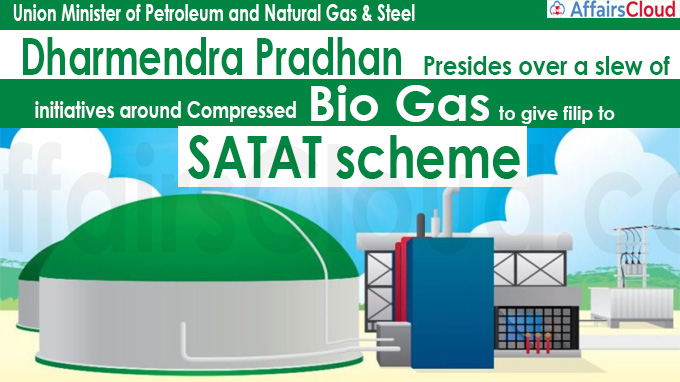 About the Cooperation agreement signed among oil & gas companies:

ii.It was intended to establish a strong network for marketing the entire produced quantity of Compressed Biogas (CBG) Plants through various channels. The associate implementers will also join the SATAT movement.

iii.As per the agreement, IndianOil shall act as coordinator under the SATAT scheme and collaborate with the Government and other agencies on behalf of Industry members.

iv.GAIL will serve as the coordinator for the implementation of the CBG-CGD (City Gas Distribution) synchronization scheme.

MoU signed by MoPNG with GGGI and Companies

i.The Global Green Growth Institute (GGGI) signed a Memorandum of Understanding (MoU) with the MoPNG as a knowledge partner under the SATAT scheme for the development of CBG/Biological Compressed Natural Gas (BioCNG).

To provide a digital boost to the SATAT programme, a website www.satat.co.in was launched as a resource centre for new and existing CBG Plants to provide details on CBG and SATAT.

i.Objective: To set up CBG production plants and make CBG available in the market as affordable transport fuels and to be used as a green fuel.

ii.It was launched on October 1, 2018 with a target production of 15 MMT of CBG from 5000 plants by 2023 with an investment of ~ Rs. 2 lakh crores. It also improves the usage of agricultural residue, cattle dung and municipal solid waste.

iii.The 5000 CBG plants will provide an investment of 1.75 lakh crore, an additional revenue source to farmers, and 75,000 direct job opportunities and lakhs of indirect jobs.

i.It is a purified and compressed biogas, which is produced through a process of anaerobic decomposition from various forest waste, Agri-waste, animal husbandry waste and marine waste like cattle dung, sugarcane press mud & spent wash of distilleries, sewage water, municipal solid waste (MSW), biodegradable fractions of industrial waste etc.
ii.The Government of India set a goal for reducing the energy emissions intensity by 33 – 35 percent by 2030 as per the Nationally Determined Contribution (NDC) targets agreed in the twenty-first session of the Conference of the Parties (COP21) at Paris, France.

About Ministry of Petroleum & Natural Gas(MoPNG):