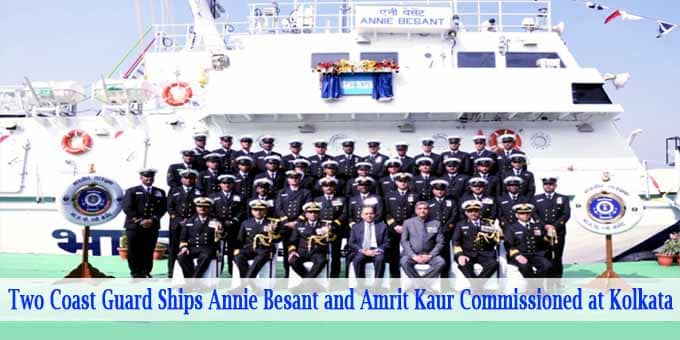 With a target of becoming a $ 5 trillion economy by 2024, $ 250 billion will be coming from the maritime zone. The Maritime economy constitutes nearly 5% of the world economy.

ii.The ship will be based at Chennai, Tamil Nadu under the operational and administrative control of the Commander, Coast Guard Region(East). It is commanded by Commandant (JG) Sunny Deo.

i.ICGS Amrit Kaur derives the name from Rajkumari Amrit Kaur, who belonged to the ruling family of Kapurthala, Punjab.

ii.She took an active part in the ‘Salt Satyagraha’ and ‘Quit India Movement’, and served Independent India as it first Health Minister.

iii.She was a founder member of All India Women’s Conference and founder President of Indian Council for Child Welfare.

iv.The ship will be based at Haldia, West Bengal under the operational and administrative control of the Commander,Coast Guard Region (North East). It is commanded by Commandant (JG) Himanshu Mishra.

iv.They are fitted with state-of-the-art technology, navigation and communication equipment, sensors and machinery and also capable of undertaking multifaceted tasks such as surveillance,search and rescue and medical evacuation.

v.The ships are also equipped with Bofors 40/60 guns and 12.7 mm SRCGs (Stabilising Remote Controlled Gun) for enhancing the fighting efficiency of the ship.

vi.The ship carry one RIB (Rigid Inflatable Boat) and a Gemini boat each for swift boarding  and search and rescue operations.