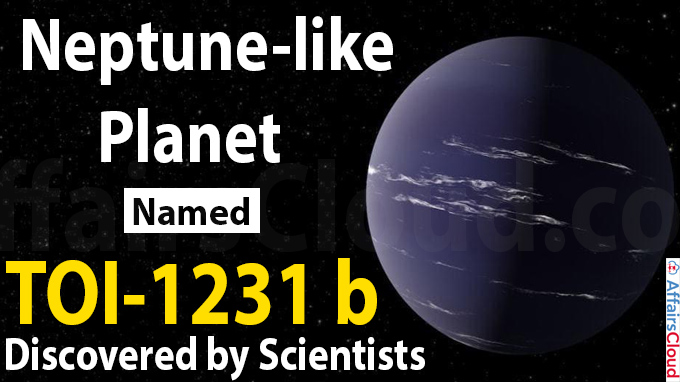 A Team of International Astronomers, discovered an exoplanet located 90 light-years away from Earth which has a Cooler atmosphere (57 Celsius) and has the possibility of having water clouds. The exoplanet called “TOI-1231 b”, orbits an M-type, dwarf star in 24 days.

ii.Once discovered by TESS, other observations are made using Planet Finder Spectrograph on the Magellan Clay telescope at Las Campanas Observatory in Chile.

Note – Exoplanets are planets located outside our Solar System, and orbits a star similar to Earth & Sun.

iii.Although the planet is uninhabitable, it is one of the coolest planets discovered by scientists.

How does TESS work?

TESS uses the Transit Method to detect exoplanets. That is, when a planet crosses in front of its star during orbit, it blocks a certain amount of light. This dip in the visible light of the Star is called Transit.

M dwarf stars are smaller in size, thus the amount of light blocked by a planet orbiting them is larger, which makes the transit more detectable.

Note – James Webb Space Telescope (JWST/Webb) jointly developed by NASA-ESA-CSA is set to launch in November 2021, it will succeed the Hubble Space Telescope which was launched in 1990.

ISRO completed the development of a Synthetic Aperture Radar (SAR) called ‘NISAR’ (NASA-ISRO SAR) which is capable of producing high-resolution images. It will be used for the Joint Earth Observation Satellite Mission of ISRO & NASA, USA.