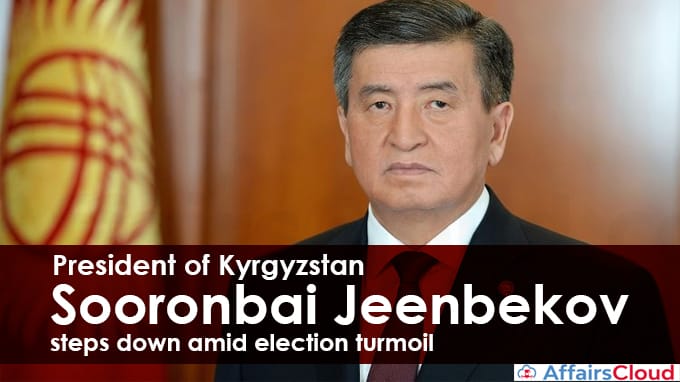 On 15th October 2020, Sooronbai Jeenbekov, the President of Kyrgyzstan announced his resignation to end the commotion and disorder caused by the results of the 2020 Parliament elections. Following the demands of the citizens of Kyrgyzstan and to settle the protest at Bishkek on 14th October 2020, the President, Sooronbai Jeenbekov announced his resignation.

i.Sooronbai Jeenbekov deployed the troops in Kyrgyzstan after declaring the state of emergency in Bishkek, capital of Kyrgyzstan to end the turmoil.

ii.Sooronbai Jeenbekov accepted the appointment of Sadyr Zhaparov as the Prime Minister(PM) after the parliament of Kyrgyzstan named him as the PM in the repeat vote conducted on 14th October 2020.

i.Kyrgyzstan was plunged into turmoil following the 2020 elections conducted on 4th October in which the pro government parties won.

ii.The opposition claimed that the election was tainted by irregularities.

iii.The protestors took over the government buildings and offices following which the Central Election Commission nullified the election.

On August 2, 2020 Former Guyanese housing minister Mohamed Irfaan Ali (40 years old) became the President of the country after he was declared as the winner of the disputed March 2, 2020 general election following a recount. He is a member of the opposition People’s Progressive Party (PPP). He succeeds David Arthur(A.) Granger.