Siemens, the German Conglomerate will invest 1 Billion Euros in India by adding 4000 jobs to its 16,000 existing workspace in the country. This has added some momentum into  Narendra Modi’s “Make in India” programme. 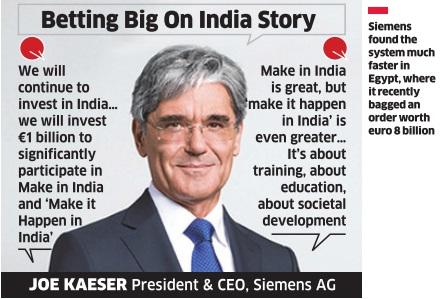 Joe Kaeser, the Chief Executive of Siemens along with his board members will be meeting Narendra Modi to speak in detail their pledges to the programme on his fouth meeting. The company is looking for mergers and acquisition as an option to blend india’s software expertise with its engineering skills.

Joe Kaeser has insisted to “Make It Happen In India” than “Make In India” which is greater than manufacturing. He added that the company has already invested in India about 2 Billion Euros in the past 10 years.  They are also considering shifting some International functions to India soon.