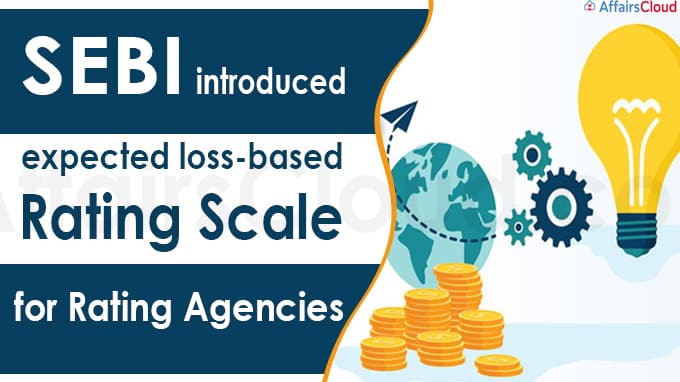 To protect the interest of investors in securities, the Securities and Exchange Board of India (SEBI) has introduced a new standardised Expected Loss (EL) based RatingScale for the Credit Rating Agencies (CRAs).

i.7 Levels of EL Based Rating Scale:

ii.Standardisation of Rating Scales Used by CRAs: To standardise the usage of rating scales, SEBI directed CRAs to align their rating scales with the rating scales that are prescribed under the guidelines of the respective financial sector regulatory/authority in terms of CRA Regulations.

Note – In the absence of such guidelines, they were instructed to follow rating scales prescribed by SEBI.

ii.The provisions related to the standardisation of rating scales are stated to be effective from April 1, 2022.

Note – The current EL based Ratings are issued in exercise of the powers conferred by Section 11 (1) of SEBI Act, 1992 read with the provisions of Regulation 20 of SEBI (CRA) Regulations, 1999.

i.It is an entity that assesses the ability and willingness of the issuer company for timely payment of interest and principal on a debt instrument. The ratings will be assigned to security or an instrument.

ii.The rating symbols represent the probability of the degree of repayment risk associated with debt instruments.

In June 2021, SEBI issued frameworks for the Investment Adviser Administration and Supervisory Body (IAASB). An entity granted recognition under the investment advisers (IAs) rules by SEBI will be designated as – IAASB, and it will be allowed to administer and supervise the IAs.

i.CRAs will be regulated by SEBI through the SEBI (CRA) Regulations, 1999, but SEBI will not be involved in the assessment made by the rating agency.