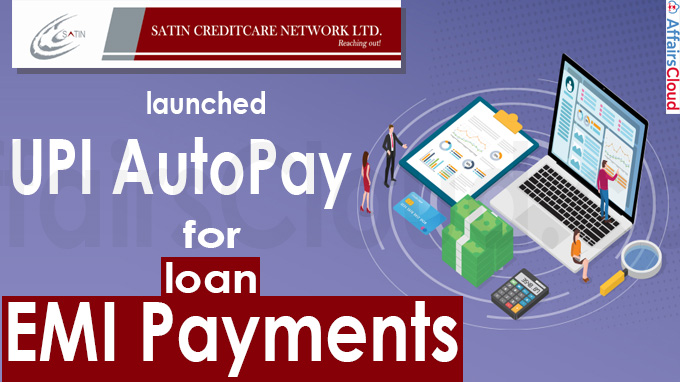 On May 02, 2021, Satin Creditcare Network Limited (SCNL), a Microfinance Institute(MFI) and HSBC India, banking partner of SCNL made a partnership with NPCI (National Payments Corporation of India) to integrate NPCI’s UPI AutoPay platform into their system, to enable fully automated loan EMI payments (Recurring Payments) by its customers.

Objective: To drive financial inclusion and boost cashless transactions in the country.

Features of UPI AutoPay under SCNL:

i.It will also empower customers of SCNL to make payments without any manual intervention and enable them to verify the transaction prior to authenticating it.

ii.It would reduce SCNL’s cash management risks and bring more efficiency to the process and strengthen the overall collection framework.

iii.SCNL began to disburse 100 percent of its loans in cashless mode with the provisions such as UPI, online web portal, customer service app and UPI AutoPay.

It was launched by NPCI in July 2020 under UPI 2.0 to enable recurring e-mandate using any UPI application for recurring payments such as mobile bills, electricity bills, EMI payments, entertainment/OTT subscriptions, insurance, mutual funds among others.

In collaboration with the NPCI, ICICI Bank has launched a facility for linking a UPI ID with its digital wallet, ‘Pockets’ and became the 1st one in the industry to link e-wallet with UPI Network.

Establishment – 1990(Registered as an NBFC with the Reserve Bank of India (RBI) in 1998 and converted into an NBFC-MFI in November 2013)
Headquarters – Gurugram, Haryana
Chairman & MD – HP Singh

It is an organisation for operating retail payments and settlement systems in India, it is an initiative of RBI and Indian Banks’ Association (IBA) under the provisions of the Payment and Settlement Systems Act, 2007 for creating a robust Payment & Settlement Infrastructure in India.