15th  Summer Paralympic Games for athletes with disabilities governed by the International Paralympic Committee held in Rio de Janeiro, Brazil  from September 7 to 18, 2016

Ankur Dhama is the India’s first blind athlete in 30 years to participate at Paralympics this year in Rio De Janeiro, Brazil. At the age of six, Ankur became completely blind when he was in Baghpat in Uttar Pradesh.

Mariyappan Thangavelu became only the third Indian ever to clinch a Paralympic gold, while Varun Bhati secured a bronze as the duo scripted history for the country in the men’s T42 high jump event of the Rio Games.

Indian archer Pooja Khanna has finished the ranking round at the 29th spot with a total of 513 points in the Women’s Individual Recurve event of the Rio Paralympics Games in Brazil. Pooja is a lone representative from India in archery event. 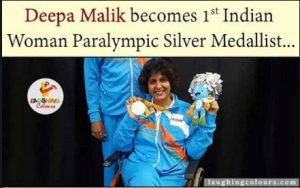 India’s Deepa Malik, a wheelchair-bound athlete, etched her name in the record books by winning silver in the shot-put F-53 category at the Rio Paralympics. She is the first Indian women to win medal.She will receive a cash award of Rs 4 crore under the Haryana Sports Scheme for her feat.

India’s Devendra Jhajharia bettered his own world record to win gold in the men’s javelin throw F46 event at the 2016 Rio Paralympics.

An Iranian Para-cyclist has died after a crash during the men’s C4-5 road race at the Rio Paralympics.

The Iranian flag has been lowered to half-mast in the Paralympic Village and a period of silence will be observed during Sunday’s closing ceremony.