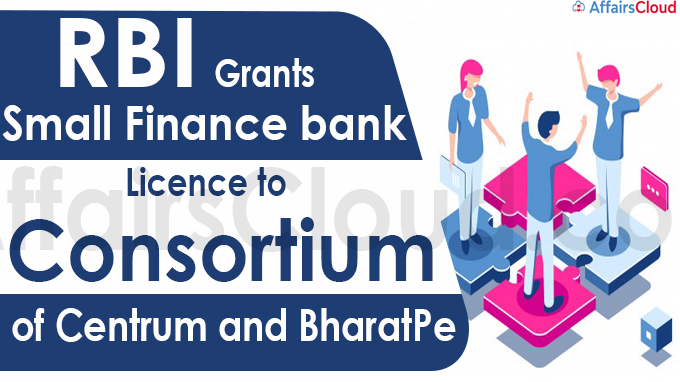 i.An Expression of Interest (EOI) was floated by Punjab and Maharashtra Co-operative (PMC) Bank for its reconstruction in November 2020.

ii.By analysing the EOI, RBI has accepted the proposal from CFSL along with Resilient Innovation and granted ‘in-principle’ approval to CFSL, to set up an SFB under general ‘Guidelines for ‘on tap’ Licensing of SFBs in the Private Sector’ dated December 5, 2019, to take over crisis-hit PMC Bank as a separate process.

iii.The new bank licence has been issued after a gap of 6 years.

i.Centrum’s MSME (Micro Small and Medium Enterprises) and Microfinance businesses will be merged into USFBL. Centrum Capital will be the promoter of USFBL.

ii.It is the 1st time ever that both CFSL and BharatPe are uniting equally to build a Bank. The SFB, joint venture, will start with a loan book of Rs 1,500 crore and it will infuse Rs 1,800 crore capital into PMC.

Note – Former State Bank of India (SBI) chairman Rajnish Kumar was appointed as the chairman of the BharatPe board.

i.SFBs are the financial institutions that will provide financial services to the unserved and unbanked region of the country.

ii.They will be established as public limited companies in the private sector under the Companies Act, 2013 and governed by the provisions of RBI Act, 1934 and Banking Regulation Act, 1949.

ii.Eligibility: Resident individuals/professionals with 10 years of experience in banking and finance will be eligible as promoters to set up SFBs.

iii.Capital Requirement: The minimum paid-up equity capital for SFB should be Rs 200 crores (US$28 million).