On April 17, 2020, Reserve Bank of India (RBI) Governor Shaktikanta Das announced much-needed relief measures for small and medium-sized financial organisations which have been struggling to operate in the wake of the Covid-19 pandemic, during a press conference in New Delhi. These are a part of a stimulus package announced by the central government to support such smaller businesses, which often borrow from Non-Banking Financial Companies (NBFCs) and Micro finance Institutions (MFIs). 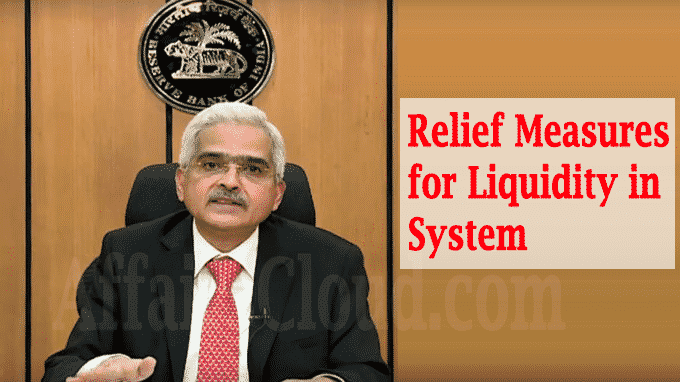 Here is the complete overview of relief measures:

RBI slashed Reverse Repo rate by 25 bps to 3.75% from 4%; repo rate remained unchanged
It has been decided to reduce the fixed reverse repo rate under liquidity adjustment facility (LAF) by 25 basis points (bps) from 4% to 3.75% with immediate effect to maintain more liquidity in the banking system.

Following table shows the Policy Rates of RBI as of April 17, 2020

Inflation could fall below 4% target by RBI in H2 FY21
The lockdown to contain COVID-19 spread has posed a serious challenge to the demand of the economy. The inflation could further decline below the central bank’s 4% target by the second half of this fiscal (H2 FY21). RBI has set a mid to long term inflation target at 4% with a bias of 2% on either side.

TLTRO 2.0 worth Rs 50,000 cr announced; Banks exempted from paying dividends
RBI will conduct a second round (TLTRO 2.0) of targeted long term repo operations (TLTRO) for an initial amount of Rs 50,000 crore that will help in refinancing NBFCs and MFIs to maintain cash flow to the small and medium enterprises (SMEs). TLTRO is a tool under which the central bank provides one-year to three-year money to banks at the prevailing repo rate. This stimulates bank lending which leads to efficient liquidity in the economy.

–Liquidity Coverage Ratio (LCR) requirement for scheduled commercial banks (SCB) brought down from 100% to 80% with immediate effect to help banks maintain sufficient high-quality liquid assets in the wake of the economic crisis.

-Banks will need to maintain additional provisioning of 10% on standstill accounts.

–90-day NPA norm will now not apply to the moratorium granted on existing loans by banks.

-Loans given by NBFCs to real estate companies to get similar benefit as given by scheduled commercial banks.

-NBFCs’ loans to delayed commercial real estate projects can be extended by a year without restructuring.

RBIs decisions powered by 4 key areas
The above decisions made by RBI focused on four key areas to ease pressure on banks and businesses in the country. These are:

Point to be noted:
Indian currency already depreciated by 7% Year-To-Date (YTD) as rupee fell 0.55% to a new record low of 76.86 against the US dollar. If currency depreciates further by 3% then the Indian government may have to pay 4.3 lakh crore Rupees as an additional Interest in their foreign borrowings which amounts to approximately 1.8% of our Gross Domestic Product (GDP).