On 15th May, The President of India , Shri Ram Nath Kovind , inaugurated the 4th Global Exhibition on Services 2018 in Mumbai , Maharashtra. This exhibition was attended by 625 exhibitors, 500 international delegates from about 100 countries and 25 Indian states. He lauded the Ministry of Commerce and Industry of the Government of India, as well as the Government of Maharashtra, the Confederation of Indian Industry and the Services Export Promotion Council, for their participation in this initiative. 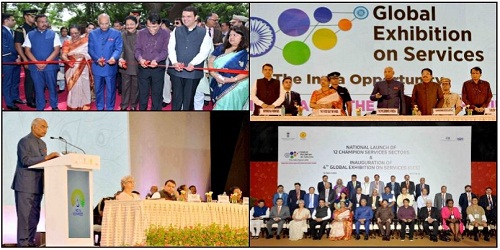 This would promote the services sector in deepening its roots in the indian economy and thus helping it  to grow as the service sector has a significant role in the growing global economy.

Salient Features of the Exhibition: