Here is the overview of visit: 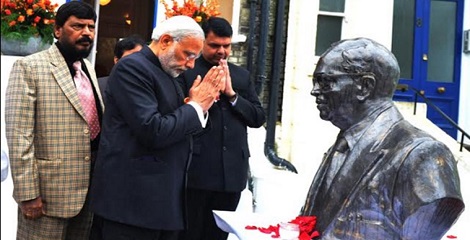 NaMo has unveiled a statue of 12th-century philosopher-statesman Basaveshwara on the south bank of the Thames and with Maharashtra CM Devendra Fadnavis inaugurated B R Ambedkar memorial in London and was announced that every year two Dalit students from India would study in any university based in London or Europe and arrangements would be made for their stay in the building.

27 deals worth 9.2 billion pounds ($14 billion) have been signed between India and UK during the NaMo’s three days visit to British country. Here is the list of key accords:

Madame Tussauds in Delhi
Merlin Entertainments plc has announced its wax attraction scheduled in early 2017 with £50 million investments in 10 years.

UK’s insurance industry accords with JVs in India to ↑ FDIs
Standard Life, Bupa and Aviva have committed to invest a combine total of £238 million of FDI in their Indian JVs.

“Disruptive” IT technology to ambulances
Advatech Health Care will invest £5 million in the UK n will introduce the same.

Collaborations on bond and equity issuance
MoU has been signed b/w London Stock Exchange Group and Yes Bank with a focus on Green Infrastructure Finance.

SBI UK new branches
SBI UK will open two branches in Hounslow and Ilford and expand of its Manchester and Leicester branches.

Wipro Digital
Wipro has increased its investment in the UK with the opening of its newest office for Wipro Digital.

TCS will train British graduates
TCS in collaboration with British Council will provide opportunities for 1,000 graduate interns from British universities to train and work in India over next years.