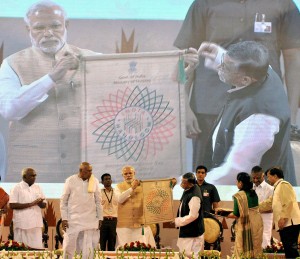 • Modi launched the “India Handloom Brand” mark in the inauguration of first National Handloom Day in Chennai.
• Narendra Modi said that there is a lack of awareness about rich tradition of Indian handloom products across the globe and suggested that film industry should take up the initiative to promote handloom products in their movies.
• Prime Minister also presented Sant Kabir Awards and National Awards for the years 2012, 2013 and 2014 to distinguished handloom personalities.
• Narendra Modi said that Handloom forms 15 % of the total growth rate. If we increase it by just 20 %, it will have a huge impact in the overall growth.
• An exhibition showcasing master creations of the awardees is also being inaugurated on the occasion in the adjacent senate building of Madras University.

• Sant Kabir Award is an Indian Government award conferred to outstanding weavers who have made valuable contribution in keeping alive the handloom heritage.
• The award was christened in the memory of Sant Kabir, a 15th-century mystic poet and sant of India.
Award consists of,
• One mounted gold coin.
• One shawl and a citation.
• In addition to this, Rs 6 lakh financial assistance will also be given to encourage and create 10 new products of high level of excellence, high aesthetic value and high quality in duration of one year.

Modi To Join World Leaders In Wax At Madame Tussauds