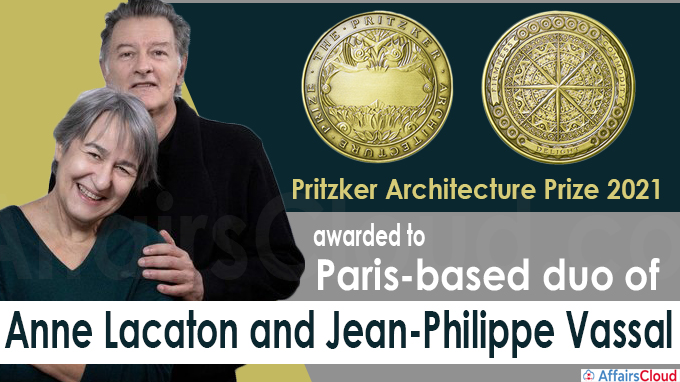 On 16th March 2021, French architects and educators Anne Lacaton and Jean-Philippe Vassal were selected as the laureates of the Pritzker Architecture Prize 2021, the highest honour in the field of architecture. The award was announced by Tom Pritzker, Chairman of The Hyatt Foundation. The Paris based duo won the award for their various social housing projects undertaken by their Paris based studio Lacaton & Vassal.

i.Anne Lacaton became the first French female architect to win the prize and the 6th woman to receive the prize since it was established in 1979.

ii.Anne Lacaton and Jean-Philippe Vassal became the first French recipient of the award since 2008 when Jean Nouvel won the award.

iii.The first French person to win the award was Christian de Portzamparc, who won the award in 1994.

About the Pritzker Architecture Prize:

i.The Pritzker Architecture Prize, an annual award presented to the living architect or architects to recognise their talent, vision and commitment towards significant contributions to humanity and build the environment through the art of architecture.

ii.The Prize was established by the Pritzker family of Chicago through their Hyatt Foundation in 1979.

The Pritzker Architecture Prize consists of 100,000 USD and a bronze medallion.

i.The award is annually presented to the laureates at a ceremony held at an architecturally significant site throughout the world.

ii.The award ceremony of 2020 and 2021 was held virtually due to the COVID-19 pandemic restrictions.

Architect Balkrishna Doshi from India won the Pritzker Architecture Prize 2018 and became the first Indian to win the Prize.

On September 18, 2020 Krushi Bhavan, a facility developed for the State’s Department of Agriculture & Farmers’ Empowerment located in Bhubaneswar, Odisha won 10th annual AZ Awards 2020 as People’s Choice Winner under the category social good. The awards were revealed at its first-ever virtual AZ Awards Gala. The 12,077-square-metre Krushi Bhavan is one among 20 winners and the only winner from India.