On November 29, 2018, Prime Minister Narendra Modi embarked on a 3-day visit to Buenos Aires, Argentina for the commencement of the 2-day 13th G20 Summit. 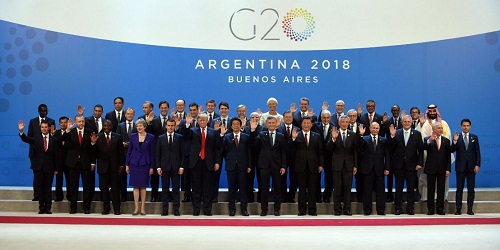 i. It was hosted by President of Argentina, Mr. Mauricio Macri.
ii. The theme of the 2018 edition of the Summit was: “Building Consensus for Fair and Sustainable Development”.
iii. It had 3 sub-themes for the summit. They were:

iv. PM Modi addressed the first session on ‘Putting People First’ where he highlighted on the following points:

v. In the 2nd session of the summit, PM Modi presented a 9-point programme reflecting stringent actions against fugitive economic offenders. They are as follows:

About G-20:
♦ The Group of Twenty (G20) is a leading forum of the world’s major economies that seeks to develop global policies to address challenges.
♦ The G20 is made up of 19 countries and the European Union. The 19 countries are Argentina, Australia, Brazil, Canada, China, Germany, France, India, Indonesia, Italy, Japan, Mexico, Russia, Saudi Arabia, South Africa, South Korea, Turkey, the United Kingdom and the United States.

Background:
The meeting happened at a time when China is engaged in the territorial disputes in the South China Sea, and with Japan in the East China Sea.
China claims almost all of the South China Sea. Vietnam, the Philippines, Malaysia, Brunei and Taiwan which includes vital sea lanes through which about $ 3 trillion in global trade passes each year.

2nd RIC (Russia, India and China) Trilateral Meeting:
On November 30, 2018, Prime Minister Narendra Modi, Chinese President Xi Jinping and Russian President Vladimir Putin held a trilateral meeting, the second among the three countries after a gap of 12 years, on the sidelines of the G-20 summit in Buenos Aires, Argentina.
i. The following took place in the meeting:

Addressing the BRICS Leaders Informal Meeting on the sidelines of the G-20 Summit
On November 30, 2018, PM Modi along with the heads of the Federative Republic of Brazil, the Russian Federation, the Republic of India, the People’s Republic of China and the Republic of South Africa, held the annual Informal BRICS Leaders’ Meeting on the margins of the G20 Summit in Buenos Aires, Argentina.
i. It was organised by: President of South Africa, Cyril Ramaphosa.
ii. On the Summit the following was agreed upon by the member states:

iii. PM Modi on his address did the following:

Meeting with Other Dignitaries:

The meetings during Argentina Visit at a glimpse: