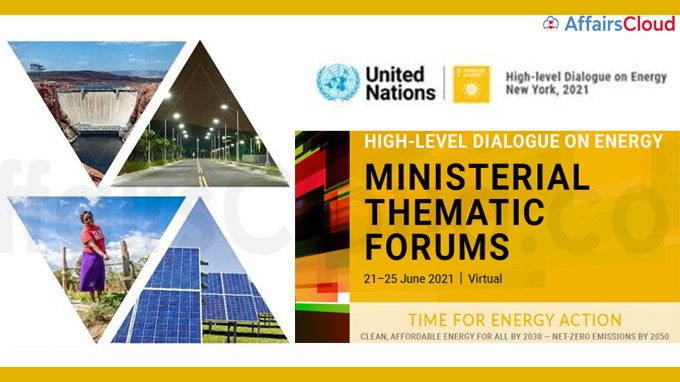 The Ministerial-level Thematic Forum for UN High Level Dialogue on Energy 2021  (HLDE 2021) was held virtually from June 21-25, 2021.  It is an initiative of United Nations-Energy (UN Energy).

i.India previewed an ‘Energy Compact’ involving the International Solar Alliance (ISA) to promote transition to solar power in developing countries. ‘Energy Compacts’ are voluntary targets and initiatives set by governments, business and others at the end of each discussion on a particular theme to support implementation of SDG7.

iii.India is set to organize a webinar on “Women in Renewable Energy and Sustainability” in collaboration with the International Solar Alliance on July 7, 2021.

India hosted the event ‘Accelerating Citizen Centric Energy Transition’ on the sidelines of the  Ministerial-level Thematic Forum for HLDE 2021.

i.The event was organized by the Ministry of New and Renewable Energy (MNRE), in collaboration with the Permanent Mission of India (PMI) to the United Nations and the Council on Energy, Environment and Water (CEEW).

ii.Minister of State (I/C) for Power, New and Renewable Energy, R K Singh  addressed the event  and launched a booklet called ‘The India Story’, it is a compilation of Indian initiatives which are shaping India’s energy transition.

iii.He also launched a website (www.energytransition.in), which will act as a repository of energy transition related knowledge resources from across the globe.

Highlights of his speech

i.R K Singh stated that India’s renewable energy capacity is the 4th largest in the world. Since 2017, the annual renewable energy addition of India has been exceeding that of coal based thermal power.

ii.He highlighted the investment opportunities in India’s RE sector.