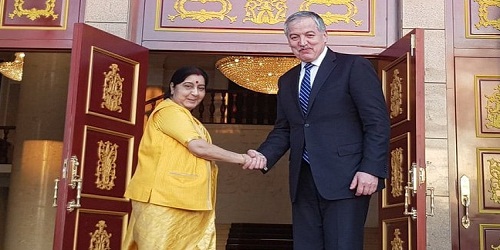 i. Discussions included stepping up bilateral ties in areas of: i. It focused on discussing prospects for further development of SCO and in-depth views on current international and regional issues.
ii. The SCO meeting consisted of a restricted format and an extended format. It started with a joint call on the President of Tajikistan Mr. Emomali Rahmon.
iii. In the Restricted format meeting, EAM spoke of the need to join hands to:
Fight terrorism, address climate change and promote connectivity & regional peace.
iv. In the Extended format meeting on behalf of India, the EAM announced the following:

About SCO:
♦ Full Form: Shanghai Cooperation Organization.
♦ India and Pakistan has joined the organization as full time members from 2017 at a summit in Astana, Kazakhstan.
♦ Number of Member Countries are: 8 (present), 4 (Observer states).
♦ Headquarters: Beijing, China
♦ The SCO was founded at a summit in Shanghai in 2001 by the presidents of Russia, China, Kyrgyz Republic, Kazakhstan, Tajikistan and Uzbekistan.
♦ Secretary General: Rashid Alimov.