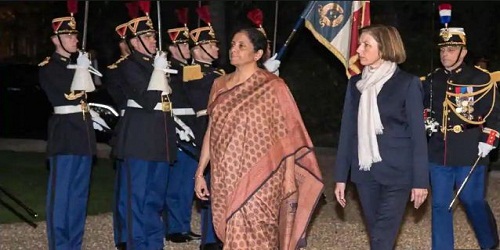 iii. The dialogue was agreed on during the summit meeting between Prime Minister Narendra Modi and French President Emmanuel Macron in March 2018.
iv. She would also address a select audience on the topic ‘India-France Defence Engagement in a Multi-polar World’ at IRSEM.

Meeting with French counterpart:
On October 12, 2018, Defence Minister Nirmala Sitharaman held delegation level talks with her French counterpart Ms. Florence Parly.
i. The talks were held under the framework of the annual Indo-French defence ministerial dialogue.
ii. They discussed on the following:

On October 12, 2018, Defence Minister also visited a production facility of French aerospace major Dassault Aviation in Argenteuil, near Paris, which manufactures the Rafale jets of India. She took stock of progress in production of the fighter jets which is due to be delivered to India by September 2019. i. She addressed   the Institute of Strategic Research (IRSEM) on the  theme of ‘India-France Defence Engagement in a Multipolar World’.
ii. She continued to stress on the following topics: