On November 9, 2018, Vice President of India, Shri M. Venkaiah Naidu arrived at Paris, France at the invitation of the Government of the Republic of France. The visit entails India’s participation in the activities commemorating the centenary of the Armistice of World War I.

On the sidelines of the celebration:
i. On November 9, 2018, on his arrival, Vice President addressed the Indian community.
ii. On November 10, 2018, he also inaugurated the Indian Armed Forces Memorial at Villers-Guislain town to commemorate  the contribution of the soldiers to the freedom of France in the World War I. 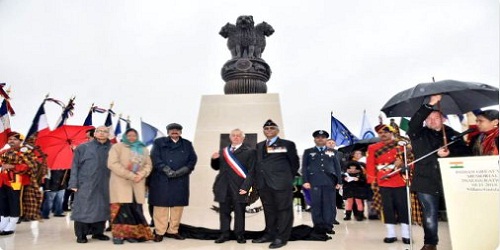 i. The Paris Peace Forum aims to establish a global platform

ii. Various discussion and debate with special emphasis on civil society initiatives were held.
iii. The Forum is a recurring, annual event aimed to promote governance solutions in 5 key areas. They are:

iv. India, represented by its Vice President Shri M. Venkaiah Naidu, attended the forum where the VP spoke on a high-level panel titled: “Dialogue of the Continents on Global Governance”.
v. This year a total of 120 projects under the 5 themes were selected of which 5 were from India. They were: