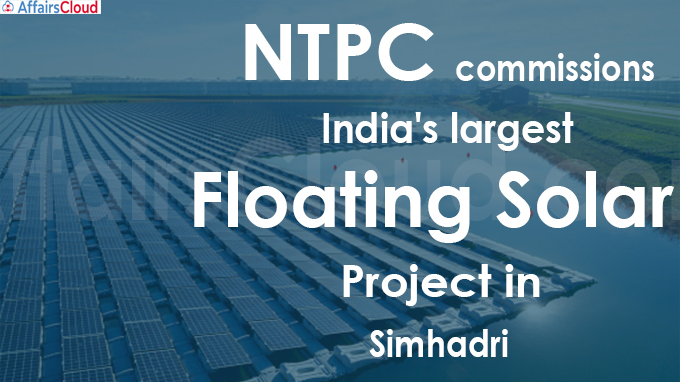 i.As per the statement of the Ministry of Power, the project could help to light around 7,000 households and also avoid the emission of at least 46,000 tons of CO2 every year (during the lifespan of the project).

ii.The project could save around 1,364 million litres of water per annum, which would be sufficient to meet the yearly water requirements of 6,700 households.

iii.Now, NTPC Group has 71 power stations including 29 renewable projects with a total installed capacity of 66,900 MW.

iv.It has over 17 GW of capacity under construction, including 5 GW of renewable energy projects. NTPC plans to invest Rs 1 trillion between 2019 and 2024 to become a 130GW power producer by 2032.

v.Simhadri Thermal power Station: The 2000MW coal-based power Station is the 1st power project to implement an open sea intake from the Bay of Bengal.

vi.NTPC is also planning to set up a hydrogen-based micro-grid system on a pilot basis at its Simhadri power plant.

Note – Flexibilisation Scheme: In 2018, the Ministry of Power has introduced the flexibilisation scheme to create flexibility in power generation and scheduling of Thermal Power stations.

NTPC Renewable Energy Ltd (NTPC REL), the subsidiary of NTPC also made an agreement with the Union Territory of Ladakh for a green hydrogen mobility project.