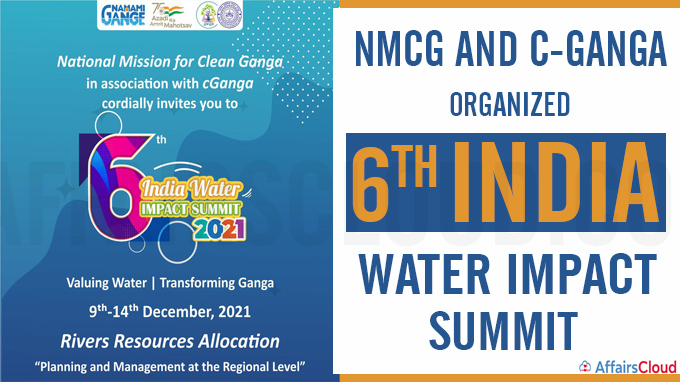 On December 9-14, 2021, the 6th edition of the India Water Impact Summit (IWIS) 2021 was organized by the National Mission for Clean Ganga (NMCG), and Centre for Ganga River Basin Management and Studies (c-Ganga) in a hybrid mode. Physically it was held at NMCG office, New Delhi and IIT (Indian Institutes of Technology), Kanpur, Uttar Pradesh.

i.This year, the Summit enlightened the participants on the complexities and management of all rivers and the water sector in India.

Signing of Memoranda of Understanding (MoUs):

The IWIS saw the signing of following MoUs:

i.An MoU between NMCG and the Centre for Policy Research (CPR), New Delhi was signed under which both organizations will work together in research and knowledge production activities for rejuvenating rivers in India.

ii.An MoU between cGanga and British Water was also signed to promote the development of 21st century infrastructure in water and the environment sector.

iii.Two MoUs have also been signed with Innovation Centre Denmark and UPS Hungary to encourage knowledge sharing and increase participation of Hungarian industry in the Ganga River Basin Restoration and Conservation Program.

iv.An MoU was also inked between C-Ganga and Norwegian Institute of Bioeconomy Research (NIBIO) for the development of a sludge management framework.

MoJS is set to deploy sensor-based IoT (Internet of Things) devices to monitor the implementation of Jal Jeevan Mission (JJM) in more than six lakh villages. With this, it aims to monitor the rural drinking water supply systems in villages.

About Ministry of Jal Shakti (MoJS):