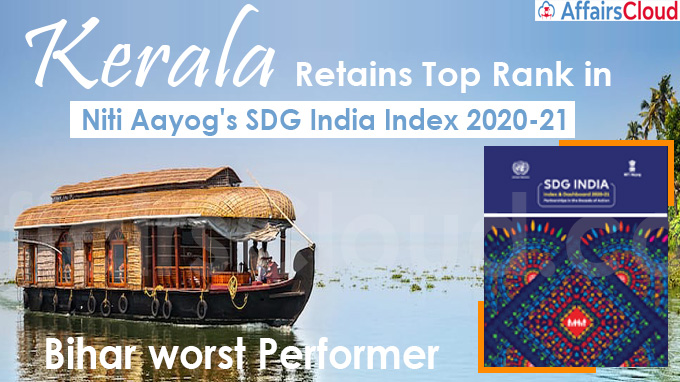 ii.Improvements in country-wide performance were driven by performance in Goals 6 (Clean Water and Sanitation), Goal 7(Affordable and Clean Energy), and composite Goal scores of 83 and 92.

The index was designed and developed by NITI Aayog in consultations with the Ministry of Statistics and Programme Implementation (MoSPI), the UN agencies led by United Nations in India, the States and Union Territories, and the key Union Ministries.

Performance and Ranking of States and UTs on SDGs 2020–21:

The SDG India Index computes goal-wise scores on the 16 SDGs for each State and UT based on their performance across the 16 SDGs. These scores range between 0–100, and if a State/UT achieves a score of 100, it signifies it has achieved the 2030 targets.

i.Sustainable development has been defined as development that meets the needs of the present without compromising the ability of future generations to meet their own needs.

iii.SDGs starts on 1 January 2016 and are expected to be achieved by 31 December 2030 and they are not legally binding.

Asian Development Bank(ADB)’s report titled “ADB’s Support for the SDGs: Enabling the 2030 Agenda for Sustainable Development through Strategy 2030” states that, a renewed focus on achieving SDGs will be essential as countries seek to rebuild from the Covid-19 pandemic.

On February 9, 2021 The Indian Economic Trade Organization (IETO) and the Government of Karnataka signed a Memorandum of Understanding(MoU) at Bengaluru, Karnataka to work closely to implement the SDGs more effectively in the state and to expand the scope of the sustainable future.

NITI Aayog was established on 1 January 2015 to replace the Planning Commission, which was instituted in 1950.